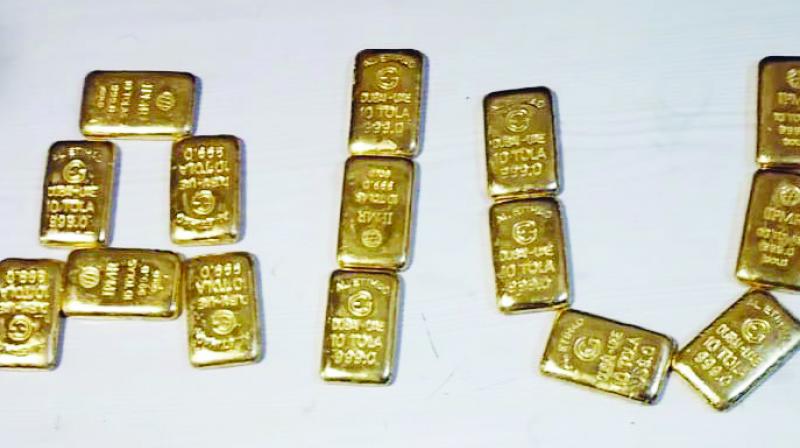 The bars that were stashed beneath a seat.

Mumbai: The Air Intelligence Unit (AIU) of Mumbai customs has seized 1.7kg of gold worth Rs 47.69 lakh from beneath the seat of an Air India aircraft that had arrived from Abu Dhabi on Wednesday. The officials said that 15 gold bars of 10 tolas each, which weighed 1,748 grams, were concealed inside hollow pipes kept under the seat.

The search was conducted inside flight number AI946. “The gold was seized based on the reasonable doubt that it was smuggled into the country without being declared. Further investigation is underway,” said an AIU officer.

The common modus of smuggling gold is via a carrier who conceals it inside his luggage or garments to get it past the immigration or places it under seats. In the latter case, an employee with the airline — mostly housekeeping staff — takes it further and ensures that it is delivered to the end receiver who meets him outside the airport.

Airline employees are not checked or suspected usually and hence this new modus has gathered ground in the recent past. Officials might question the flier who had reserved that seat.

A case has been registered against an unknown person under sections of the Customs Act.

On August 8, the Central Industrial Security Force (CISF) intercepted a passenger after he arrived from Riyadh to Mumbai and seized 232 gram gold worth `6.33 lakh from his possession. The said person was set to fly to Mangalore from Mumbai, before which he was apprehended.