Removal of the height restriction made it possible for them to achieve this feat. 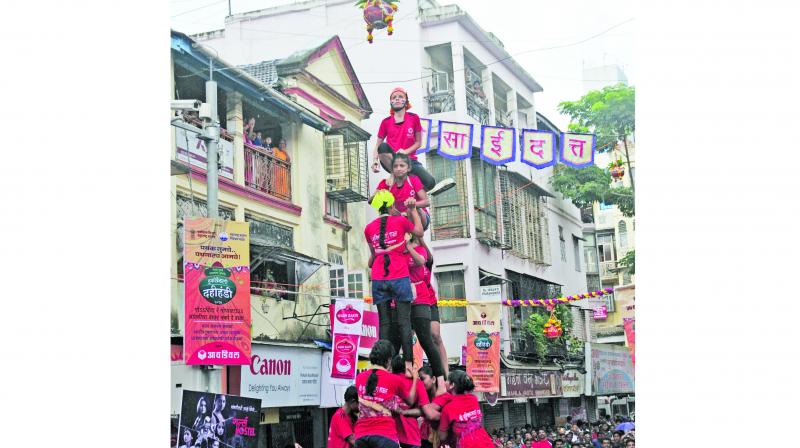 The pyramid made in Thane. (Photo: Debashish Dey)

Mumbai: This year, female Govindas put up a grand show as members of Aradhya Seva Mandal, Chunabhatti, managed to break a dahi handi in Dadar by forming a human pyramid of as many as eight tiers. Removal of the height restriction made it possible for them to achieve this feat.

The Dadar dahi handi in question i.e. Women’s Dahi Handi, is organised by the Shree Sai Dutta Mitra Mandal, and for more than 15 years now, the first preference has always been given to female Govindas. All-women Govinda groups, mainly from Dadar, Goregaon, Vile Parle and Vikhroli, drew crowds as they formed six-tier pyramids to break the dahi handi. Finally, female Govindas of Aradhya Seva Mandal, Chunabhatti, succeeded in reaching and breaking the dahi handi, amidst deafening cheers and claps. They are among the first to have broken this Dahi Handi which has a reputation for being among the highest in the city.

Neeta Parab of Govinda Mahila Pathak told The Asian Age, “We  are no less than men. As with all other fields, there should be no discrimination against women even in this sport. Over 90 women aged five to 45 and ranging from housewives to nurses and engineers to kabaddi players are part of this mandal. ”