The area, which used to be an open space shared by old buildings of the area, was being used as a virtual dumping spot. 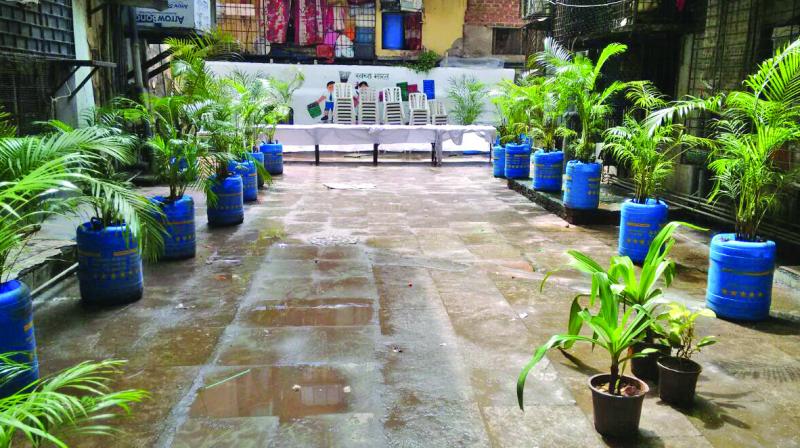 Advance Locality Management (ALM) group joined hands with the BMC and turned the place into a garden.

Mumbai: It used to be a dump with stench for a decade. Now, a joint effort by South Mumbai residents and the Brihanmumbai Municipal Corporation (BMC) has turned the space into a garden.

While the rest of the city is starving for an open space, residents of Nawroji Hill road area in Dongri chose an innovative way to reclaim the a 3,000 sq ft relief area near New Allu Paru building. The area, which used to be an open space shared by old buildings of the area, was being used as a virtual dumping spot.

“These are the old buildings which have a central place as an open area, but since our ward has lot of problems related to garbage disposal, residents used to throw waste into that space. It was a big area full of garbage,” said Sadiq Uttanwala, a resident. However, after the civic body began the house-to-house waste collection, the dumping reduced but the space still remained a damp area.

Thus, in order to reclaim that open space, the area’s Advance Locality Management (ALM) group joined hands with the BMC and turned the place into a garden. The garden was inaugurated on Monday ahead of Independence Day by Udaykumar Shiroorkar, assistant municipal commissioner of ‘B’ ward.

“It was a good initiative suggested by the residents. A small garden is formed inside the society premises and has been beautified well,” said Mr Shiroorkar. According to residents, many old buildings of the ward still have such open spaces, but the idea vanished when tenants started dumping garbage there. “There are a few other buildings in the ward that have such open spaces. This idea can be replicated there too,” added Mr Uttanwala.