Dominated by a sizeable presence of the North Indian community, the actual population of ward number five is pegged at 36,241. 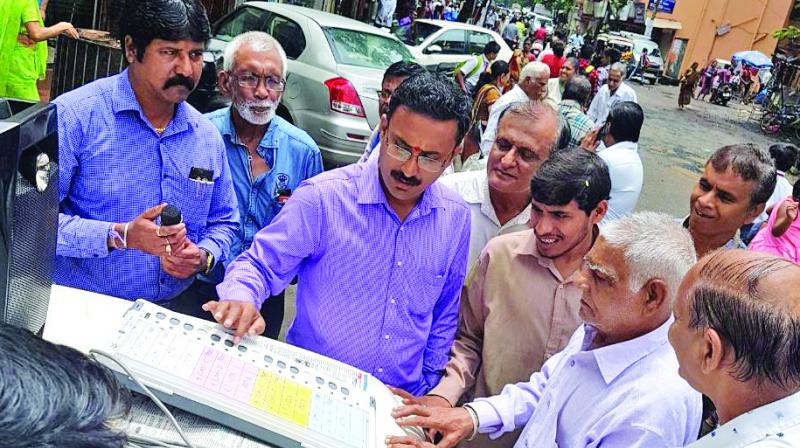 Poll personnel educating voters about the uses of EVMs and colour codes for panels.

Mumbai: The political temperatures have started rising ahead of the upcoming Mira Bhayandar Municipal Corporation (MBMC) election on August 20. Tension prevailed in the Narmada Nagar area of Bhayandar (east) on Monday night over the allegations of distribution of cash by the BJP candidates from ward number five.

After allegations surfaced that the BJP candidates Rakesh Shah, Vandana Patil and Sriprakash Singh (Munna) were distributing cash to the voters, a huge crowd of the rival camp gathered outside Vaishali building and started shouting anti-BJP slogans. Following this, the Navghar police immediately reached the spot and ensured a safe passage for the BJP candidates.

“We have noted the incident in the station diary. However further action, if needed will follow only after a detailed report is filed by the election officials.” said a senior police inspector R.E. Bhalsingh.

“While nothing incriminating has been found yet, we will soon submit our report to the returning officer supported by the video footage recorded by our personnel,” said an official from the Election Commission’s flying squad.

While local members of Shiv Sena have alleged that the authorities were trying to cover up the matter, the BJP candidates have claimed that they were unnecessarily dragged into the controversy by the members of the opposition camp. According to the EC’s rules, if the inspection team has any suspicion or received any complaint — that along with the campaign material, cash amount is to be distributed among the electorate — the amount should be seized, and action should be taken against the person concerned, under the provisions of the Indian Penal Code (IPC).

Dominated by a sizeable presence of the North Indian community, the actual population of ward number five is pegged at 36,241. However, the electoral strength stands at 29,316 — 16,196 male and 13,120 female voters.

While the MNS, Congress, BVA and NCP have also fielded their candidates from this ward, the BJP panel is entangled in a fierce battle with their Shiv Sena counterparts — Rajshree Walunj, Kanchan Laad,Vishal Raghunath Patil and Rohit Patel.

In an attempt to help voters become familiar with the functioning of the Electronic Voting Machines (EVM), the state election commission (SEC) has embarked on an awareness drive in the city. Apart from uploading videos in this context on social media platforms, the SEC has adopted another unique initiative.

twin-city, to educate, orient and inform the local electorate about the functioning, usage and advantages of the EVM’s and solve related queries if the voters raise any. “The campaign assumes significance as the city will participate in the four-panel voting system for the first time and every EVM related to the panel will be colour coded,” said municipal commissioner Dr. Naresh Gite.