Govindas keep it low this year 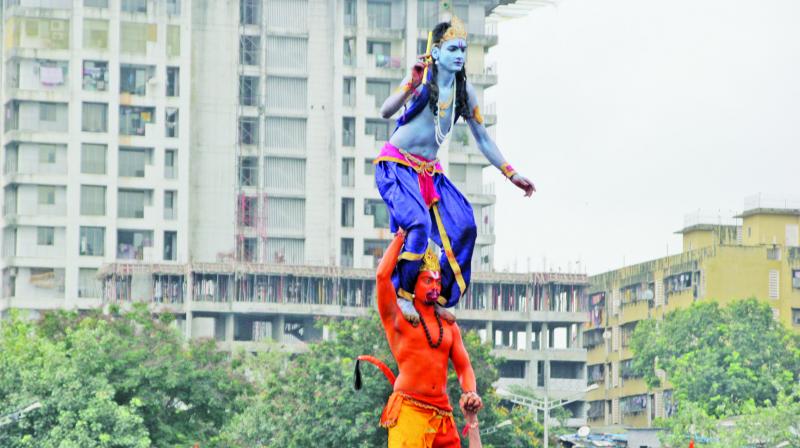 Govindas dressed as Hanuman and Krishna at a Dahi Handi event at Borivali. (Photo: Mrugesh Bandiwadekar)

Mumbai: Despite receiving the high court’s nod to form pyramids above 20-feet, Govinda groups in the city observed a low-key celebration this year. A Govinda group, which participated in eight Dahi Handi competitions, said that they merely got around Rs 500/1000 for each event, unlike in the past, when the prize money would be at least Rs 10,000 per Dahi Handi. Three Dahi Handis in Thane and one in Borivali and Ghatkopar areas were considered as big events this year.

Several Mumbai-based Dahi Handi mandals were upset as big prizes were not announced this year. Several organisers clarified that they did not have enough time to arrange for cash rewards or practice building human pyramids higher than 20 feet, which were banned in 2014 but the Bombay high court lifted the ban recently.

Demonetisations and implementation of Goods and Service Tax (GST) had created problems for the organisers this year, said Kamlesh Bhoir, a member of the Dahi Handi Samanvay (coordination) committee.  According to Mr Bhoir, the celebrations dipped in the city this year. The noise levels were also low this year due to restrictions. The noise-level cannot go above 55 decibels in residential areas, as per the central Noise Pollution Rules. “There was a dip in celebrations this year due to demonetisation and GST,” said Mr Bhoir. “Earlier, organisers and sponsors used to come forward and donate money, but they are scared to donate now as they don’t want to come under the scanner of the IT department or the ED,” he added. Sameer Sawant, chief of Prem Nagar Dahi Handi Mandal of Chunabhatti said, “Restricting the participation of under-14 kids could be a reason behind the tepid response. Companies like Amul and Fevicol are regular sponsors who donate money to mandals, but this year they didn’t take interest.  The HC order came just a week before the festival, so neither sponsors nor mandals were ready for big celebration,” he said.

Dahi Handi was a silent affair this year, as a national body of sound and light professionals, Professional Audio and Lighting Association (PALA), decided that its members would not issue 12,000 loudspeakers in Mumbai and over a lakh across the state on Dahi Handi and Independence Day, protesting against alleged police harassment, rude behaviour and the confiscating of their loudspeakers. It called for a state-wide ‘mute day’ on Tuesday and pointed out the law was being misinterpreted and that authorities were not correctly implementing the directions of the Supreme Court to control noise levels.