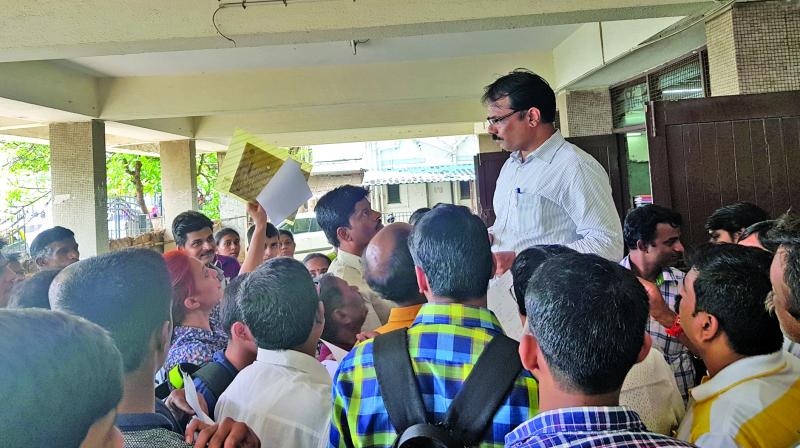 File picture of B. B Chavan, deputy director of education, Mumbai Division meeting parents and students outside the school education department at Charni Road.

Mumbai: There is potentially disturbing news for around 40,000 applicants of First Year Junior College (FYJC) courses, who have been waiting even though four merit rounds are over. The state’s school education department has completely scrapped the ‘offline’ mode of admissions from the academic year 2017-18, as it wants admission only on ‘merit’ basis and not via irregular methods.

The prime reason why the education department scrapped the offline admission is to prevent parents from falling into the trap of ‘donations’. “The system where the college asks for donation in order to get a seat should go. For this, we have to give admission to all the students through the online process and that will be done because we have 50,000-plus vacant seats,” said B.B. Chavan, deputy director of education, Mumbai region.

Colleges usually start offline admissions for students who had not got admission anywhere after the four merit rounds. Through this system, the seats are not the department’s responsibility as it completely depends on what the college wants.

Seats which fall under the in-house, management and minority quotas have to be surrendered to the department, and will be considered by it for students who have not got admission even after the fourth and the special round.