Commuters have welcomed the move and now the MTB will be looking to implement this at other traffic ridden spots as well in the near future. 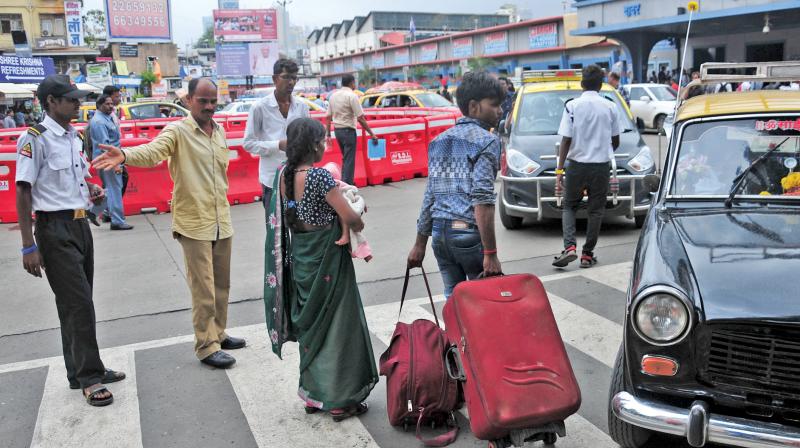 The MTB will be looking to implement the initiative at other traffic-ridden spots in the city. (Photo: Debasish Dey)

Mumbai: In a positive initiative, the Mumbai Traffic Police (MTP) have tried to wrest control of the chaos that awaits commuters outside Dadar east station, especially those looking to hail a taxi to take them to the destination of their choice.

The mad hunt for a taxi may just be over now. By creating a large circular diversion outside Dadar station, near the Swami Narayan temple, taxis drivers have no other choice but to fall in line and wait for their passengers.

Commuters have welcomed the move and now the MTB will be looking to implement this at other traffic ridden spots as well in the near future. It has identified around 60 such spots where they will be setting up diversions for metered auto/taxi stands.

Joint commissioner of police (traffic), Amitesh Kumar, told The Asian Age, “We have selected around 30-40 points. We have created similar diversions at Dadar’s Siddhivinayak temple and in south Mumbai’s Crawford market. The initiative has gone a long way in ironing out the traffic snarls in these areas. Basically, we have come up with a strategy where disorganised streets are targeted and diversions will be created to smooth the snarls.”

Mr Kumar added, “We are trying to take up many initiatives one by one, out of which some are successful and some are not. But it is more of a experimental-cum-innovative intervention, which we are finalising after giving it some thought.”

People now form disciplined queues outside Dadar east station where the MTP has stationed traffic cops around the red plastic barricades, forcing the cab drivers to go around the diversion and then get in the queue and wait for passengers.

Ravikant Devraj, who has been driving a taxi for the last eight years now, said, “This is indeed a very bad move, considering our situation. I have earned only Rs 250 after starting my day as early as 5 am. Also we have to now take a big diversion, which makes the ride a good five minutes longer.”