Mr Kovind, who is on a visit to Mumbai, met the MLAs and MPs at Garware Club in South Mumbai. 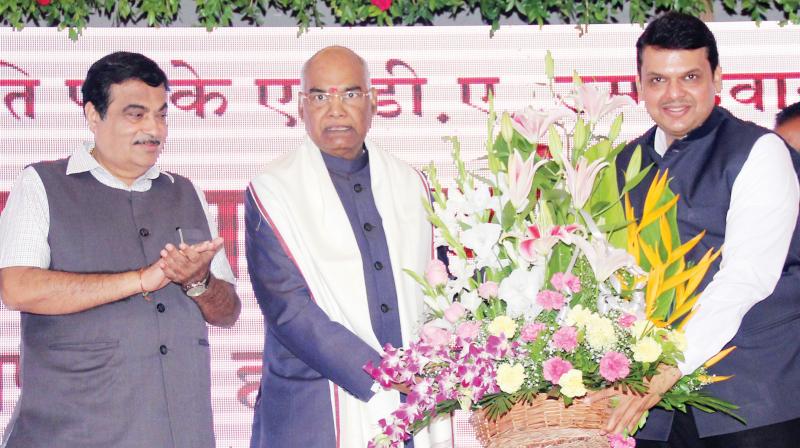 Mumbai: Ram Nath Kovind, the BJP presidential candidate, met Shiv Sena and BJP MLA and MPs on Saturday, urging them to vote for him. The presidential election will be held on July 17.

Mr Kovind, who is on a visit to Mumbai, met the MLAs and MPs at Garware Club in South Mumbai. Though he did not visit Shiv Sena chief Uddhav Thackeray’s residence Matoshree, he spoke to him over the phone and thanked him for supporting his candidature. Interestingly, previous presidential candidates Pratibha Patil and Pranab Mukerjee, whom the Shiv Sena had supported, had paid visits to Matoshree during their pre-election visits.

CM Devendra Fadnavis has assured Kovind that more than 200 legislatures would vote for him during the forthcoming election.

Mr Kovind who arrived in Mumbai at 9.30 am on Saturday directly went to the Garware club in South Mumbai where all legislature members were waiting for him. Union Minister for road and highways Nitin Gadkari, State BJP President Rao Saheb Danve, Industrial Minister Subhash Desai and Rajysabha MP Ramdas Athavale have spoken in support of Kovind. BJP’s partner in the state assembly, Sena has also showed its support to Kovind. It’s leader Subhash Desai said he will stick to his word.

While giving a speech, Kovind declared that he would perform his duties impartially while remaining within the constitutional framework.

In the 288 members Maharashtra Legislative Assembly BJP’s strength is 123 and Shivsena’s is 63. Fadnavis has already succeeded in gathering support from at least 14 independents. Some BJP leaders hinted that few legislators from Congress and NCP might support Kovind. However, both Congress and NCP have denied such a possibility.

NCP has 42 members and Congress has 41 members in state assembly and they are optimistic to get support from other parties like Samajwadi party, peasant and workers party in favour of Meera Kumar. Maharashtra the Value of legislator’s vote is 175.