No relief to man booked for poaching barking deer

Carcasses of two barking deer and animal trapping equipment were recovered from the bags. 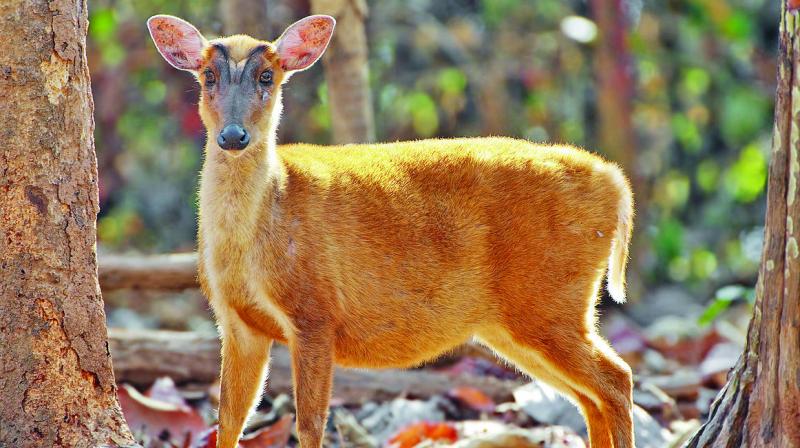 The barking deer is also known as the red muntjac or Indian muntjac.

Mumbai: The Nagpur bench of the Bombay high court has refused to grant anticipatory bail to a Vasant Rathod booked for poaching barking deer.

The prosecution’s case is that earlier this year, while patrolling the reserved forest in Umerkhed, Nanded, forest officials apprehended few persons with two gunny bags. Except a Dinesh Jadhav, all other suspects fled from the spot at the time.

Carcasses of two barking deer and animal trapping equipment were recovered from the bags. During investigation, Jadhav revealed how the hunting operation was carried out which convinced forest officials were that this is not a stray incident but is a part of the organised crime of poaching endangered species. He also gave names of his accomplices.

Rathod denied being present at the spot and nothing has been recovered from him. But public prosecutor N. R. Patil opposed his application saying forest officials had seen him running from the spot and there is evidence against him. He also informed the court that in the past too, Rathod was arrested over a similar offence but was acquitted.

After the arguments Justice S. B. Shukre observed, “The animal which has been prima facie poached in the instant case is an endangered species of herbivores and constitutes a significant part of the pretty base of the larger predators including tiger. It is well known that healthier the prey base is, better is the health of the predators and healthier are the predators like tiger, higher is the degree of pristine condition of forest ecosystem, so essential for survival of mankind.” The judge rejected the application adding further, “Therefore, the crime, prima facie, committed by this applicant is very
serious.”