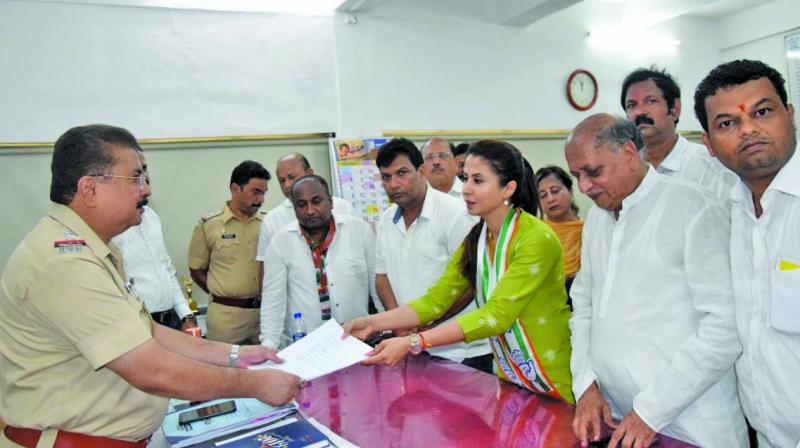 Mumbai: Accepting the request of actor-turned-politician Urmila Matondkar, the Mumbai police on Monday granted protection to her till the Lok Sabha elections are over. Ms Matondkar had written an application to the police seeking protection for herself after a group of “BJP supporters” clashed with Congress workers during her poll campaign in the Mumbai North constituency.

Sangramsinh Nishandar, DCP, Zone 11, stated, “An application was received from Ms Matondkar and considering her request, protection has been granted to her till the elections get over. He, however, said that the police is conducting a probe into her allegations to find out if those involved in the scuffle were supporters of BJP.”

He further added, “What we can say is that those involved in the incident were commuters”.

In a handwritten complaint in Marathi, signed by Ms Matondkar, addressed to the senior police inspector of the Borivali police station, she alleged that on Monday morning when she was canvassing in the vicinity of Gokul Shopping Centre near Borivali (west) railway station, around 20-25 ‘supporters’ of the BJP holding party flags and chanting ‘Modi, Modi’ surrounded her and her supporters. According to her letter, the group also chanted indecent slogans that made her and other female supporters very uncomfortable.

Her letter further stated that this incident has caused her mental stress and she wanted protection from Mumbai police for all her future public meetings and rallies. “Since today’s incident has violated the model code of conduct, the police should search those people and take strict action against them,” read her letter.

The Bharatiya Janata Party (BJP) has fielded sitting MP Gopal Shetty from the constituency. Mr Shetty suggested that those who clashed with Congress workers were not BJP activists, but some local train commuters who admired the leadership of Prime Minister Narendra Modi.

Taking to Twitter, she also said, “Shocked at the blatant violation of the code of conduct and hostile acts by BJP workers. I was constrained to lodge a police complaint for my own safety and to save the dignity of my female supporters.”

Speaking to the reporters Matondkar said, “This is just the beginning and may take a violent turn. I have asked for police protection, as there is a threat to my life. I have filed a police complaint.”

She also said that those who ‘barged’ into the rally were not common people, but activists of the BJP. The common people will not behave in ‘violent ways’ like these persons, she added.