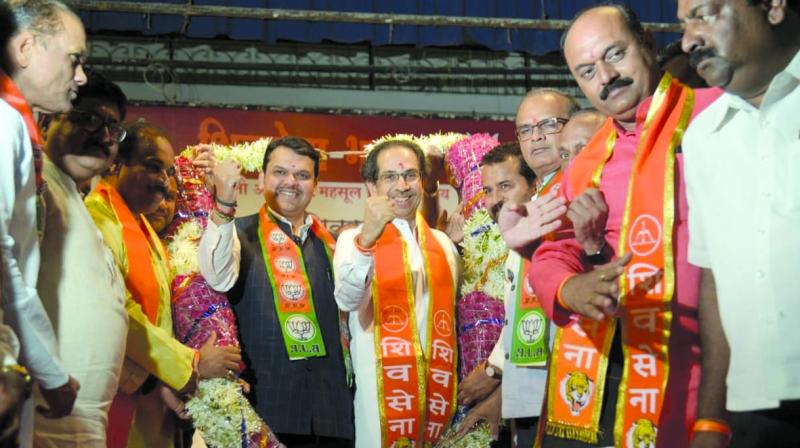 Mumbai: The Bhartiya Janata Party (BJP) and Shiv Sena on Friday held their joint campaign at Amravati and Nagpur. While addressing workers of both the parties, chief minister Devendra Fadnavis took a dig at Nationalist Congress Party (NCP) chief Sharad Pawar, saying that ‘some leaders’ had withdrawn from the election soon after hearing the news of the BJP-Sena alliance.

Sena chief Uddhav Thackeray urged Mr Fadnavis to refrain from inducting Mr Pawar in the BJP fold. The Sena chief said that he is scared to level of criticism against politicians today, as he does not know to which party they may end up joining tomorrow.

In a lighter vein, the Sena chief said whomever came under line of fire from BJP-Sena alliance, later joined it. “If Mr Pawar joins BJP, whom will we criticise? When there is no one in front of us, let critics be there in front of us,” he added.

Speaking over the alliance, Mr Thackeray said, “We have not allowed our differences to come in way of the state’s interests.” Praising Prime Minister Narendra Modi, he said, “I still call him Narendra Bhai. It is proud to see that a person like my brother is holding the Prime Minister’s post.”

Mr Fadnavis in his speech in Nagpur asked the party workers to maintain the 10-0 score in Vidarbha as of year 2014 and said that the BJP-Sena will win overs 42 seats.

Listing the achievements of BJP-Sena government, he said five lakh houses have been built and equal number of houses will be built ahead. Criticising Mr Pawar, Mr Thackeray said, “A cricket player (Imran Khan) in Pakistan became PM but here the one (Pawar) who was dreaming to become PM ultimately ended up becoming cricket board president.”

While addressing joint meeting of party workers in Amravati, Mr Thackeray did not say anything regarding the foot overbridge collapse near CST in Mumbai.

Senior BJP leader Nitin Gadkari did not turn up for the launch in Amr-avati. However, in Nagpur Mr Gadkari recalled listed his achievements in NDA government.

Addressing workers in  Amravati, Mr. Fadnavis said, “The BJP-Shiv Sena alliance is neither merely an alliance between two parties or organisations, nor it is for power. It is the alliance of ideologies shared by Hindu-oriented parties for nationalism. It is as unbreakable as the bond of Fevicol.”

An apparent attack on Congress-NCP leaders, Mr Fadnavis said that some political rivals desperately wanted BJP-Sena to separate, as they had their eye on the power.