‘Audit of ill-fated FOB had lapses’ 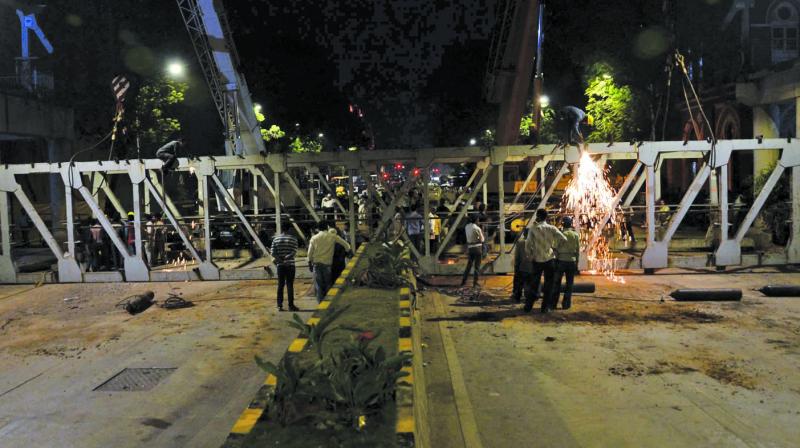 Mumbai: Less than 24 hours after a foot overbridge (FOB) collapsed outside Chhatrapati Shivaji Maharaj Terminus (CSMT), claiming six lives, the Brihanmumbai Municipal Corporation (BMC) officially accepted responsibility for the tragedy and said that the structural audit of the bridge was carried out in an irresponsible and negligent manner due to which it failed to point out an impending issues.

In this backdrop, four BMC officials have been found guilty and two of them, who are engineers, have been suspended for poor supervision a while full-fledged departmental enquiry (FFDE) has been ordered against two senior officers.

Municipal commissioner Ajoy Mehta passed the orders on Friday after the preliminary report on the bridge collapse had been submitted.

BMC officers had asserted on Thursday that they had carried structural repairs of the bridge, which is only 34 years old, as per the audit report; however, the BMC has now found that the structural audit itself had many lapses due to which the bridge collapsed. The report says that the auditor did not raise any alarm with regard to any anticipated failure and had reported that all critical components comprising concrete and steel were in a good condition. The audit was carried by DD Desai Associated Engineering Consultants and Analyst Pvt Ltd, which is now blacklisted by the BMC. Mr Mehta has ordered the filing of an FIR against the auditor.

Surprisingly, while the auditor inspected the bridge in December 2016 and condition assessment was carried in July 2017, the final report was submitted to the BMC in August 2018. The report found that the bridge needed no major repairs and termed good for public use and the construction year was also wrongly shown. The bridge is built 1984-86 but the auditor mentioned as 1998.