Metro 3 few days away from getting 1st 1-km stretch

A total 17 tunnel boring machines will be operating for the tunneling work of the 33.5km long underground corridor. 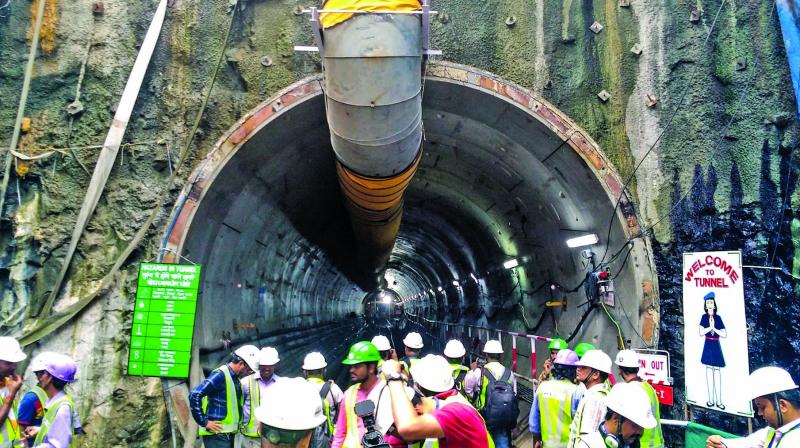 An 800-metre stretch has been completed so far.

Mumbai: With 18 per cent of the work carried out, the Metro 3 (Colaba-Bandra-Seepz) project is just a few days away from completing its first kilometre stretch. So far, with tunnel boring machines working at different sites, an 800 metre stretch has been completed. The Mumbai Metro Rail Corporation (MMRC), however, is lagging behind in terms of schedule. According to its estimates, an average 28 per cent of work should have been completed by January 2018.

All the tunnel boring machines are expected to complete their work between BKC and Aarey Colony by June 2021. S.K. Gupta, director (projects), MMRC, said, “We have started the operations of 6 TBMs and two have been lowered down. The tunneling work should be completed in the next two years. So far, we have completed 800 metre of tunneling and 60 per cent of piling work (foundation and ground work).”

Commenting on the delay, Mr Gupta said, “High court orders about not cutting trees and complaints by activists have affected the pace of work.’

A total 17 tunnel boring machines will be operating for the tunneling work of the 33.5km long underground corridor. “Out of the 17, 11 have arrived at the city ports,” said Mr Gupta.

Meanwhile, the MMRC has constructed steel decks at 21 locations near the stations of Metro 3; these decks are temporary ways for vehicles until construction work gets completed. Mr Gupta said, “The decks are built at an expense of Rs 13 crore to Rs 15 crore at each site. They have the capacity to hold a heavy war tank.”