According to the hospital’s dean, Dr Avinash Supe, dialysis services will be restored completely in the next three to four days. 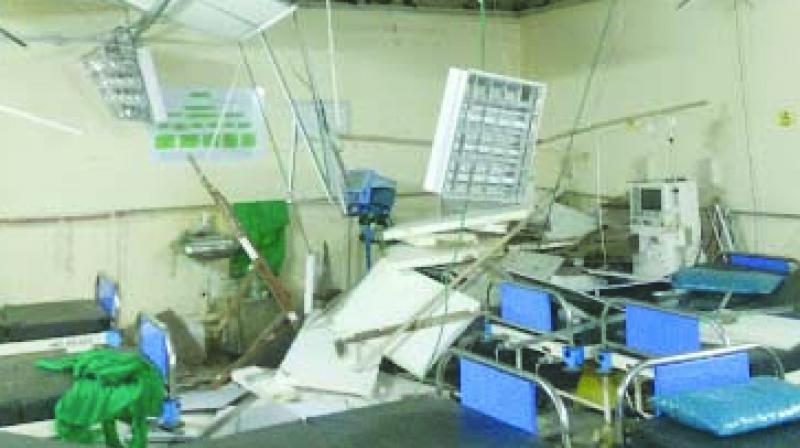 While the injured people are being treated, the dialysis unit has been shifted.

Mumbai: A large chunk of the ceiling of the dialysis room at the civic-run KEM Hospital collapsed early on Thursday, injuring two patients. The ceiling portion came crashing down in the room, which is located on the second floor at the dialysis department. While the injured — who were admitted for dialysis — are being treated, the dialysis unit has been shifted to an alternate location in the hospital.

According to the hospital’s dean, Dr Avinash Supe, dialysis services will be restored completely in the next three to four days.

Talking to The Asian Age, Dr Supe, “Two patients who were present in that room received minor injuries after the plaster collapsed in the dialysis department.”  Dr Supe said, “Their condition is stable. We have moved the dialysis centre to another place and the plaster work will be completed in three to four days.”

The hospital staff declined to name the injured patients. One of the patients’ relative, Amit Salve (36), said, “My uncle, who has renal dysfunction, has been receiving treatment here, and we come here twice in a week.” He said his uncle was sitting on the bed when the incident happened and some bits of plaster fell on him, which scratched his arm. “The accident was scary, but by the grace of God,

it’s a minor one,” said Mr Salve. Dr Nivrutti Hase, professor and head of KEM Hospital’s nephrology department, said, “There are eight to nine beds in the dialysis department. In a day, around two to 25 patients undergo dialysis. But, this incident occurred early in the morning. So, there were no major injuries. Since the building is old, it was supposed to be repaired. But the incident occurred before that.