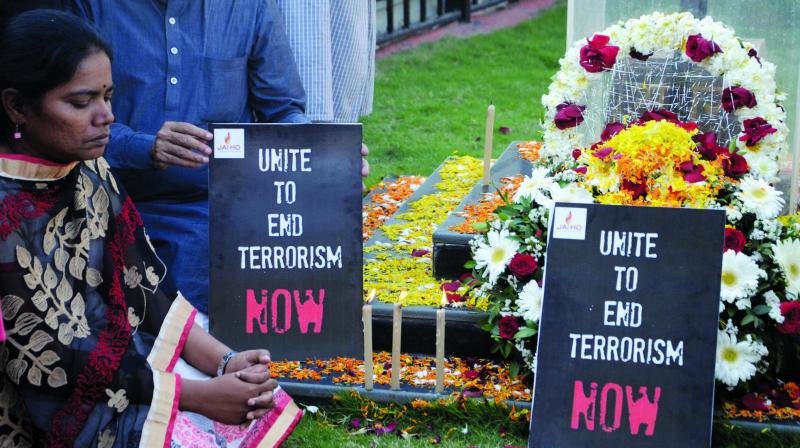 Social activists pay their respects to the soldiers who were slain in the Pulwama attack at Hutatma Smarak on Friday. (Photo: Shripad Naik)

Mumbai: Three of the 40 Central Reserve Police Force (CRPF) jawans who were kil-led in a fidayeen attack in Jammu and Kashmir’s Pulwama of Thursday were from Maharashtra.

Jawan Rahul Karande hailed from Vithurai Wadi village in Sangli district while two others, Sanjay Rajput and Nitin Rathod, were from Buldhana district.

Rajput and Rathod hailed from Malkapur and Chorpangra village respectively. Rajput’s mortals remains are expected to arrive in Nagpur Saturday, his brother Rajesh said, adding that the last rites would be performed at Malkapur in the evening. According to him, Rajput was attached to the CRPF’s 213th battalion, based in Nagpur, for the last four years. Rajesh s-aid his brother, in his 23-year-long career with the paramilitary force, had served in Kashmir, Chhattisgarh and also in the Northeast.

The mortal remains of the martyrs will be brought to their hometowns where they will be laid to rest with state honours.

The families of the martyrs are in a state of shock following the news of the deaths of their family members.

The ministry of information and broadcasting, meanwhile, issued an advisory to the media, especially broadcast news channels, asking them to refrain from airing sensitive content. “The TV channels are advised to be cautious with regards to content that is likely to encourage or incite violence, or containing anything against maintenance of law and order or something that promotes anti-national attitude (sic),” stated the advisory.

The state government, meanwhile, announced monetary support for families of the martyrs. “We have announced Rs 50 lakh for the kin of martyred jawans from Mah-arashtra and the government will take responsibility of their rehabilitation. 125 crore Indians are their family members,” tweeted Maharashtra chief minister Devendra Fadnavis. “Deeply pained. Entire Nation stands with the #CRPF family. We salute the supreme sacrifice for the Nation and pray for speedy recovery of the injured ones!” he said in another tweet.

The state government on Friday also paid tribute here to the deceased.