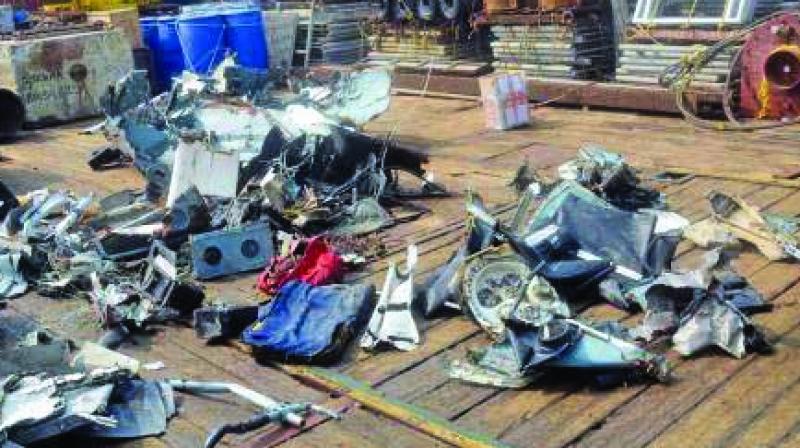 The debris of Pawan Hans helicopter.

The search and rescue ships  — ONGC vessel Samudra Sevak recovered parts of the aircraft’s rotor blades, main gearbox, tail gearbox, both engines, emergency locator transmitter (ELT) among others. “As per our information, the ONGC deployed more divers to trace the missing crew members. Some body parts were found yesterday while more were traced this morning,” the official said. The remains have been taken to Cooper Hospital. The DNA samples of relatives of the missing crewmembers have been taken,” the official said.

While five of the dead bodies brought for autopsy at the state-run Cooper Hospital have been identified and handed over to the relatives, the identity of the sixth body that was recovered on Sunday could not get confirmed.

“The India Coast Guard Ship Samrat, who is also on-scene commander, has confirmed recovery of another body belonging to the missing crew from the aircraft. The Coast Guard is maintaining high level coordination with ONGC in the operation and CG Ships and aircraft based at Mumbai and Daman respectively are being continuously deployed at the crash location,” said the officer.

Coast Guard Dornier aircraft from Daman also continued to scan the area to search aircraft debris and human remains. The whole operation is being supervised by a high level joint delegation from ONGC and Pawan Hans Ltd, which visited the Coast Guard western region headquarters in Mumbai on Monday.

The search area is being divided between various agencies to cover maximum area in shortest possible time. The search is being assisted by the Indian Naval Services’ Makar, a special hydrographic ship with side scan sonar capability that will supplement search efforts commenced on Sunday.