The mission was executed by INS Sunayna, which has been deployed for anti-piracy patrol in the Gulf of Aden since October 6. 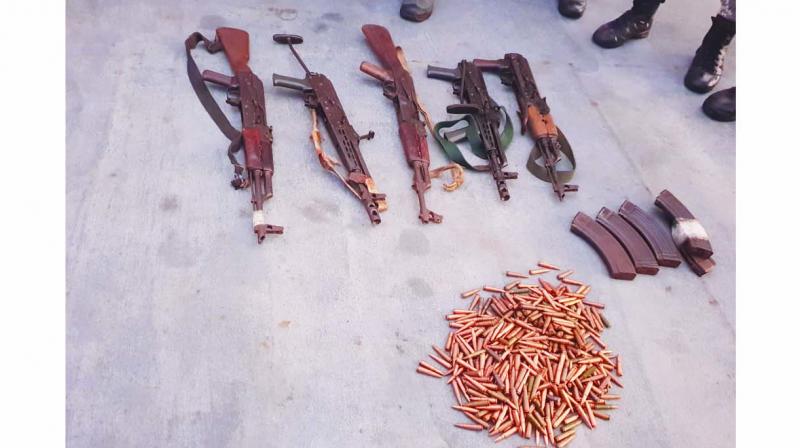 The seized arms and ammunition.

Mumbai: The Indian Navy intercepted a suspicious vessel during an offshore patrol on December 13 and during a Visit, Board, Search and Seizure (VBSS) operation approximately 20 nautical miles (nm) off the coast of Somalia, seized illegal arms including five rifles (with AK-47) and 471 rounds of ammunition.

Only after the confiscation of arms and ammunition to prevent its misuse by the crew for piracy-related activities, the fishing vessel was allowed to proceed further.

The mission was executed by INS Sunayna, which has been deployed for anti-piracy patrol in the Gulf of Aden since October 6.

During a search operation carried out on Nov-ember 9 and December 7, the ship seized six AK-47s and one Light Machine Gun. “The vigilance exercised by the Indian Navy (IN) ships reiterates the commitment of India tow-ards ensuring safe seas for Indians as well as international seafarers in the In-dian Ocean Region (IOR),” stated a Navy release.

The international effort to combat piracy in the Gulf of Aden – east coast of Somalia region involves the participation of many countries such as China, Japan, United States, Russia and the European Union (EU) nations apart from India.

Warships operating in the region for combating piracy are authorised by the United Nations Secu-rity Council Resolution 2383 (2017) to board vessels suspected of engaging in illegal activities.

In a similar seizure in November, INS Sunayna had confiscated arms and ammunition  from a number of boats approximately 400 nautical miles northeast of Mogadishu off the coast of Somalia.