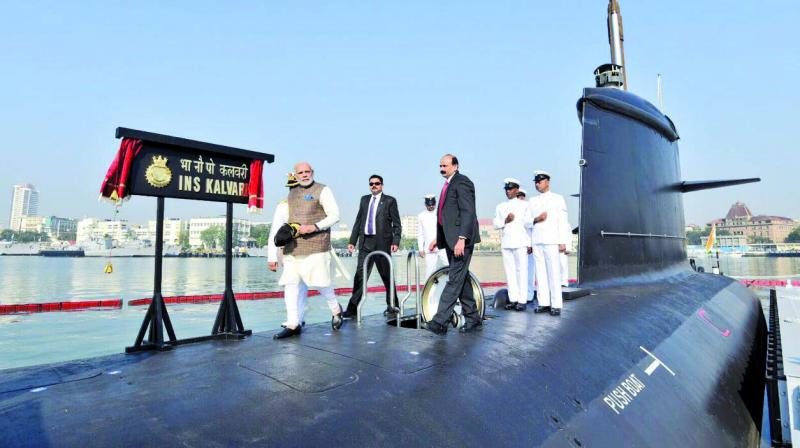 Mumbai: The INS Kalvari, the first of the six indigenously built Scorpene-class submarines, which will be built by 2020 with the help of France, was commissioned by Prime Minister Narendra Modi at the Naval Dockyard in Mumbai on Thursday. The submarine was built by the Mazgaon Dock Shipbuilders Limited (MDL).

The Prime Minister described INS Kalvari as a prime example of ‘Make in India.’ However, he refrained from making any political comment in his address at the function, which was under the scanner of the Election Commission.

Mr Modi also said that the road to development in the 21st century goes through the Indian Ocean, which is why the Indian Ocean has a special place in the policies of the government.

He added that the government’s policies and the bravery of the armed forces has ensured that the use of terrorism as a proxy war in Jammu and Kashmir has not been successful.

The commissioning of INS Kalvari has reaffirmed the giant strides taken by the MDL in the ongoing ‘Make In India’ programme, which is being actively implemented by the Department of Defence Production (MoD).

Commodore Rakesh Anand, chairman and managing director of MDL said, “The induction of INS Kalvari into the Indian Navy would be a game changer in underwater warfare.”

He added that the aspect pertaining to completion of all weapon firings prior to the commissioning of the submarine, was indeed an unique achievement.

The Scorpene submarine can undertake multifarious types of missions, including anti-surface warfare, anti-submarine warfare, intelligence gathering, mine laying and area surveillance among others.

The submarine is designed to operate in all theatres, with means provided to ensure interoperability with other components of a Naval Task Force, making it a generational shift in submarine operations.

“Building the Scorpene was indeed a challenge as the complexity of the simplest of tasks increased exponentially as all the work was done in the most congested of spaces. This complexity was further aggravated by the stringent tolerances required to be achieved. However, these challenges were successfully overcome by MDL without any compromise on quality,” said a release issued by the Indian Navy.

Kalvari is named after the dreaded Tiger Shark, a deep sea predator. As is the tradition, ships and submarines belonging to the Navy, are re-incarnated after decommissioning. So it is with Kalvari.

The first Kalvari, commissioned on December 8, 1967, was also the first submarine of the Indian Navy. She was decommissioned on 31 May 1996, after almost 30 years of service to the nation.The experience and expertise that MDL has gained from the Scorpene project together with enhanced and upgraded infrastructure has ensured that the shipyard is fully geared for undertaking construction of the next generation of submarines.