The experts pointed out that INS Kalvari is only the first of the 24 conventional diesel-electric submarines to be built in India by 2030. 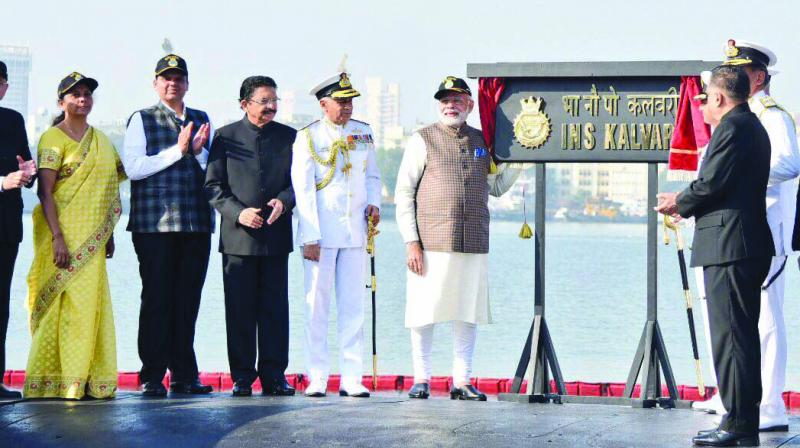 Mumbai: On a day when Prime Minister Narendra Modi commissioned the INS Kalvari (S-21), the first of the six Scorpene class submarines built under Project 75 (Kalvari Class) of the Indian Navy in Mumbai, strategic experts on Thursday said that while the latest attack boat will enhance the country’s naval warfare capability, India must expedite its much-delayed submarine-building projects. The experts pointed out that INS Kalvari is only the first of the 24 conventional diesel-electric submarines to be built in India by 2030, as per an Indian defence plan of 1999.

“If India is to have a fleet of around 18 submarines, it should build a submarine every two-three years. India must quicken the pace of submarine-building and the political class must cooperate in the effort in an objective manner, not episodic,” strategic affairs analyst Commodore (retired) C Uday Bhaskar, who is the director of the Delhi-based think-tank, Society for Policy Studies, told The Asian Age.

Former Western Naval Command chief Vice Admiral (retired) Shekhar Sinha said, “The 1999 plan was to build 24 conventional submarines in 30 years but it took around 17 years to roll out the first such submarines. The Kalvari was delayed by around five-six years.”

He added, “It is expected after Kalvari that the rest of the submarines in the project will be rolled out soon.” It is the first of the six submarines being constructed at Mazgaon Docks Ltd in collaboration with  French builder M/s Naval Group.

INS Kalvari’s weapon system is based on Submarine Tactical Integrated Combat System, which can process information in detecting target with help of Sonar. Its search-and-attack periscope is equipped with infrared and low-light-level attack cameras and laser range finders to spot targets on the surface of the sea. Scorpene class has ensured superior stealth features such as advanced acoustic silencing techniques.