The BJP would conduct election for more 90 thousand booths of the Amit Shah-led organisation. 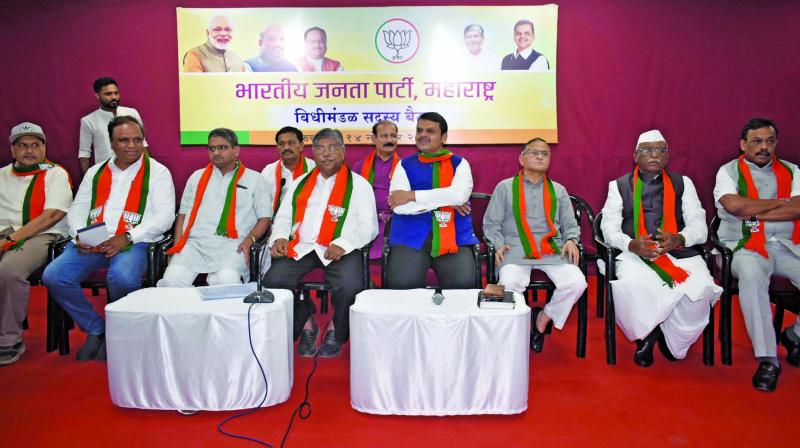 Mumbai: While the Bharatiya Janata Party (BJP) has not given up hopes of forming the new government in Maharashtra, the party has also started preparing for mid-term polls.

Towards this, it held a meeting with 105 sitting MLAs and other independent MLAs at Vasant Smruti, Dadar, late Thursday evening.

After the meeting, BJP leader Ashish Shelar told reporters outside the venue that the the meeting included all newly-elected members and those supporting BJP leader Mr Fadnavis.

Mr Shelar said, “The BJP is keeping over the three-part play (referring to the Shiv Sena, Congress and Nationalist Congress Party (NCP)) for forming government. The BJP core committee has been keeping a close eye on the current political situation in Maharashtra."

He also said that the Amit Shah-led would conduct election for more 90 thousand booths of the organisation.

This exercise would be completed in next one month with the help of all the legislators, he added.

In order to help distressed farmers, the party has decided to send its MLAs and MLCs to aid relief works.

A senior BJP leader, familiar with the three-day exercise undertaken by the party, said that it has been preparing for mid-term polls in the event no government is formed in the state.

“A meeting of party office-bearers and district presidents from across the state will be held Friday in the presence of BJP general secretary Bhupendra Yadav, who played a key role in overseeing the Maharashtra polls, and the party's Maharashtra in-charge Saroj Pandey. The meeting will also be attended by BJP spokespersons,” the leader said.

Sources said that a meeting will also be held Saturday with all the defeated candidates.

By securing 105 out of the 288 seats, the BJP emerged as the single largest party but was unable to form the government with its ally, Shiv Sena, which got 56 seats in the 288-member Maharashtra Assembly.

The Sonia Gandhi-led Congress and the Sharad Pawar-led Nationalist Congress Party won 44 and 54 seats, respectively, in the Assembly elections, which were held across the state in a single phase on October 21.