Maha chief secy gives an undertaking, saying cash will be released in 2 tranches. 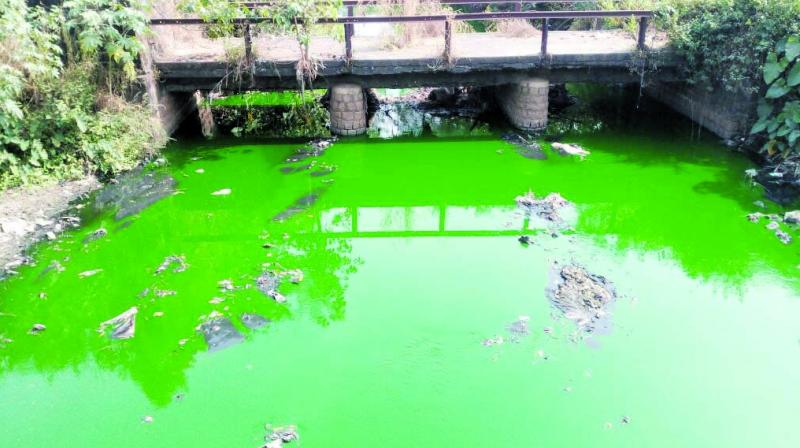 A river stream of the Ulhas river is seen with a sickly green colour due to the release of chemicals from a unit.

Mumbai: The Supreme Court on Tuesday asked state chief secretary Sumit Mullick to give an undertaking to disburse Rs 100 crore for restoration of the Ulhas and Waldhuni rivers which have been allegedly polluted due to the discharge of hazardous chemical by local industrial units. Mr Mullick has given an undertaking that the money would be released in two tranches of 30 days each.

Due to the ineffectiveness by the civic bodies to check river pollution, the apex court has now put the onus on the state chief secretary to take a decision on shutting all illegal industries immediately and to implement the disconnection of electricity and water supply to all jeans washing units in Ulhasnagar. The Asian Age had reported that illegal jeans washing units in Ulhasnagar had allegedly been releasing hazardous chemicals into the Ulhas river that connects with Waldhuni river.

Mr Mullick, while presenting the action plan to curb the river pollution on Tuesday, stated that the civic bodies have financial constraints to pay the penalty. However, a bench of Justice Madan Lukur and Justice Deepak Gupta ordered Mr Mullick to facilitate the release of funds for the restoration of rivers and submit the affidavits on December 14, 2017, and January 18, 2018.

“This is the highest cost imposed on the government for river pollution. The chief secretary will be personally liable for any non-compliance with the order,” said Stalin Dayanand, projects director, Vanashakti.