The investigators are yet to ascertain the identity of the person who was to collect the gold from the dustbin. 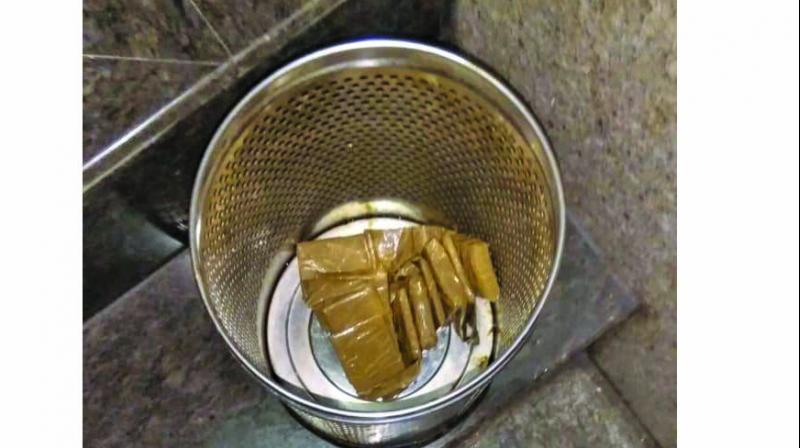 The gold dumped inside a dustbin in the airport toilet

Mumbai: The Air Intelligence Unit (AIU) of Mumbai customs intercepted a flyer soon after he dropped a package in a dustbin, which later turned out to be gold worth Rs 1.04 crore. The AIU officials found his action suspicious and stopped him for questioning. Upon checking, the package was found to contain 32 gold bars.

The accused, identified as Mohammad Irshad, was intercepted by an AIU team in the early hours of Wednesday when he was spotted trying to hide smuggled gold. Irshad was intercepted right after he dropped five packets inside a dustbin. The act was captured on CCTV cameras and found to be suspicious, officials said. After he dropped the packets and went ahead, the contents of the same were checked only to find 32 gold bars valued at Rs 1.04 crore.

An AIU officer said, “They were dropped into a dustbin inside the toilet near the immigration hall. The same were to be picked up by another person, whose identity is yet to be established. The modus operandi involves multiple flyers, who exchange smuggled gold inside the terminal. It is then brought out by the one who has flown on the domestic route, to avoid suspicion.”

When officials interrogated Irshad, he claimed the gold bars had been given to him to be dropped inside the garbage bin. He was promised money for his role. The investigators are yet to ascertain the identity of the person who was to collect the gold from the dustbin.

The other modus operandi used for gold smuggling is to leave the bars under the seat or hide them inside the seat cover. They are then collected by a cleaning staff member, who is hand-in-glove with the smugglers and paid for his help. The staffer gets the gold outside the terminal as he is not subjected to checks.