At least 50,000 staffers across security forces have been deployed to protect the city. 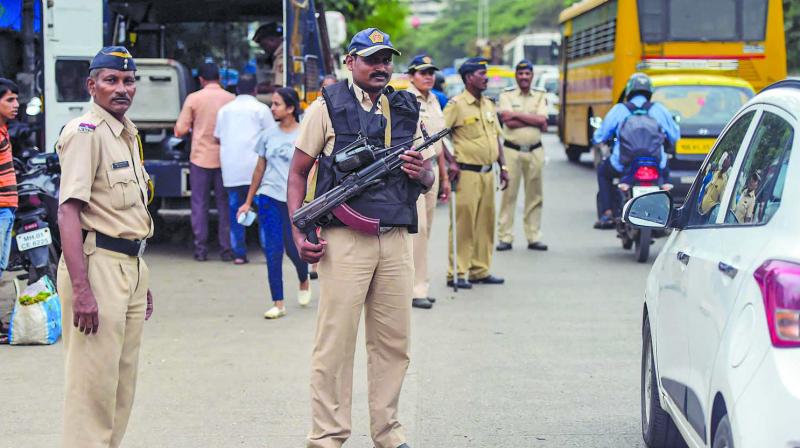 Police personnel maintain security in a street on the eve of Independence Day on Wednesday. (Photo: PTI)

Mumbai: The CCTV camera network in the city, including at railway stations and crowded places like malls will be the Mumbai police’s key to keeping the city safe on the Independence Day today. The police are taking no chances amidst the nationwide alert in the wake of developments in Jammu & Kashmir (J&K).

“We will be scanning the CCTV camera footage constantly for any suspicious activity. Crowded places will see the presence of BDDS squads for conducting checks. Civil-clothed police personnel will be deployed at sensitive spo-ts,” said Ashok Pranay, police spokesperson.

The Mumbai airport and important railway terminals are already on alert while places of worship and malls and markets will see heavy police presence. Watertight security will be provided at several places, including Girgaum and Juhu chowpatty and Gateway of India. Quick Response Team commandos will be deployed at vital installations and other vantage points, officials said. At least 50,000 staffers across security forces, including the city police, state reserve police, riot control police, bomb detection and disposal squad and home guards, have been deployed to protect the city.

Special teams of the Mumbai police including those of the Mumbai crime branch and special branch have begun combing operations and scanning of occupants at hotels and lodges, with the traffic police carrying out checks (nakabandi) at various places in the city.

In case of any emergency, the police has sought sharing of suspicious activities with them on the helpline number 100, @MumbaiPolice.