Tiny tots in for I-Day celebration on Tuesday

There were speeches on the contribution of freedom fighters, dance performances, sports and cultural activities. 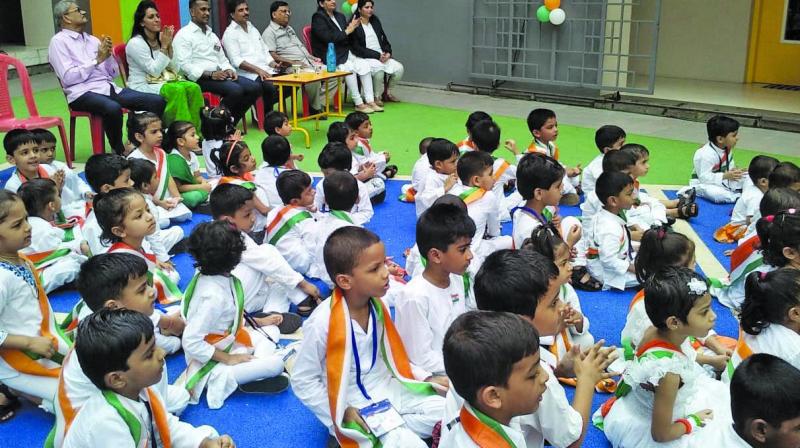 MUMBAI: Pre-primary and Class one students in city schools celebrated the co-untry’s 72nd Independence Day on Tuesday, a day ahead of the occasion, as Wednesday is a holiday.

As part of the revelry, children aged four to seven years learned about India’s freedom struggle, made paper flags and marched to commemorate the occasion. There were speeches on the contribution of freedom fighters, dance performances, sports and cultural activities.

“We did not carry out flag hoisting but all other things that pre-primary students need to learn and understand about their nation. They have been preparing for the dances, singing and speeches since last week, which they presented on Tuesday in front of our guests and other students.”

Rajnath Mehrotra, coordinator of a Kalyan-based school, said, “Our students drew national flags, made flags using paper and wooden sticks, and drew national animals and monuments on paper. Furthermore, they were showed certain documentaries explaining the freedom movements for them to get an idea how they are able to breathe freely in this country today. In the end, they were shown pictures of freedom fighters and their contributions to the country.”

Along with students, teachers and schools, too, participated in the celebrations, inviting special guests from the police, armed forces and other national forces. Fletcher Patel, an army officer, graced the I-Day celebrations of a Dadar school as chief guest. Several other schools in the western and central suburbs invited local police offers to share their insights with the children.

Asked why I-Day was being celebrated a day before, Swaroop Sinha, a teacher who is also a parent, said, “The number of pre-primary and class one students is very small and hence, they won’t be able to attend early morning celebrations. This is also to make occasion more child-friendly for them.”