Police catch 4 in link with Game of Thrones leak

Complaint in this case was filed by Prime Focus Technologies, which was tasked with storing and processing the episodes for Hotstar app. 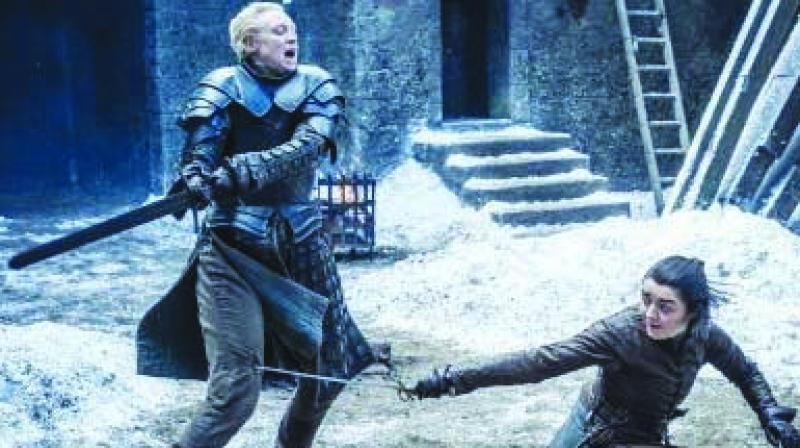 A still from the leaked episode, The Spoils of War.

Mumbai: Mumbai Police’s cyber crime investigation cell on Monday arrested four people for leaking the fourth episode of the ongoing season of megahit TV series Game of Thrones before it was aired in India. There were employees of a Mumbai-based company, the police said. The Mumbai police registered a case against accused — Mohammed Suhail, Abhishekh Ghadiyal, Navinchandra Joshi and Alok Sharma —  who hail from Bangalore, for allegedly leaking episode 64 of popular television series last week.

Stating that the Maharashtra and Mumbai had police jointly detected and arrested the accused in the data leak, Inspector General of Police (cyber) Brijesh Singh said, “Streaming platform Hotstar had approached the IG’s office after the data leak was discovered. The Maharashtra cyber police, after completing the preliminary inquiry, zeroed down on the accused who were connected with Prime Prime Focus Technologies. The case was handed over to Mumbai police for further investigation. The cyber police provided the accuseds’ information and technical support to the Mumbai police in apprehending the guilty. The Mumbai police cyber police station in Bandra Kurla Complex is investigating the matter further.”

The complaint in this case was filed by Prime Focus Technologies, which was tasked with storing and processing the episodes for Hotstar app.

DCP cyber crime Akbar Pathan said, “After receiving a complaint from a company, we investigated the case and have arrested four individuals for unauthorised publication of the fourth episode from season seven.”

The case had been registered under Sections 408 (Criminal breach of trust by clerk or servant) and 34 (common intention) of IPC and 43 (damage to computer, computer system, etc.) and 66 (computer related offences) of the IT Act.