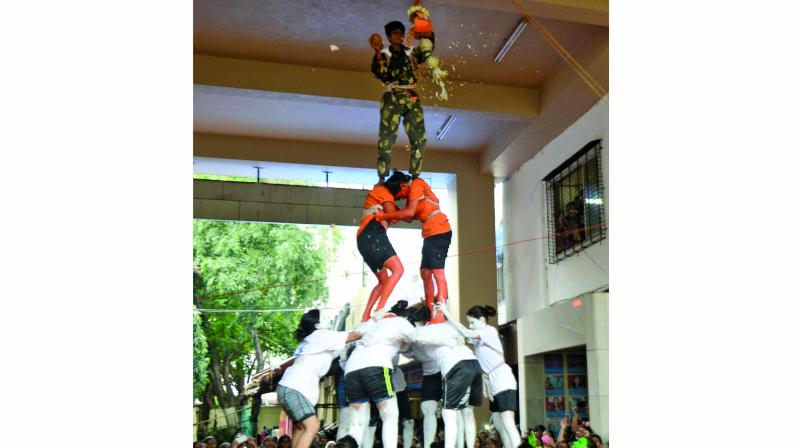 Few firms are ready to sponsor for Dahi Handi.

Mumbai: Dahi Handi celebrations across the city are likely to be relatively low-key affairs as major Govinda Mandals and groups aren’t doling out massive cash prizes in the wake of demonetisation, implementation of the Goods and Services Tax (GST) and income tax woes.

While the fear of running afoul of the government has dampened the holiday spirit, most companies have also declined sponsorships, citing a cash crunch.

Around 750 to 800 Govinda groups will be participating in Tuesday’s Dahi Handi festival and — according to the high court’s guidelines — participants will have to register themselves, stating that they are insured. However only 70 per cent of participants this year are insured.

“For those who cannot afford life insurance, spot insurance facilities have been arranged,” said Kamlesh Bhoir, secretary of the Dahi Handi Samanvay Samiti.

Speaking about the cash prizes, Mr Bhoir said, “As demonetisation has kicked in, the organisers are in a fix. They have incurred huge losses, as they cannot declare the amount for celebrations. The organisers have acquired only 50 per cent sponsorship at corporate level, and the other 50 per cent have been pooled in by the office-bearers of the troupes.”

Mr Bhoir added, “The organisers have been hit drastically, with some of them facing up to 90 per cent losses. But since it is a festival whose goal is to bring people together, celebrations are being held, but it will be a low-key affair this year.”

MNS leader Bala Nandgaonkar told The Asian Age that enthusiasm had been hit ever since the Supreme Court’s 2014 decision that imposed restrictions on the height of human pyramids and disallowed minors from participating in the activity. “This year, despite the HC decision that only restricts the age limit, we will keep it a low-key affair and build only six-tier human pyramids,” Mr Nandgaonkar said.

The Bombay high court on August 7 lifted a 20-feet height limit on human pyramids. Furthermore, the court accepted the statement made by the state government that those below the age of 14 years can’t be allowed to participate in the festival. Since the essence of this decision was to keep safety in mind, the bywords of this year’s celebrations are ‘zero injury’.