Mumbai prepares for next spate of heavy showers

Rains will intensify further as moderate to heavy rains are expected. 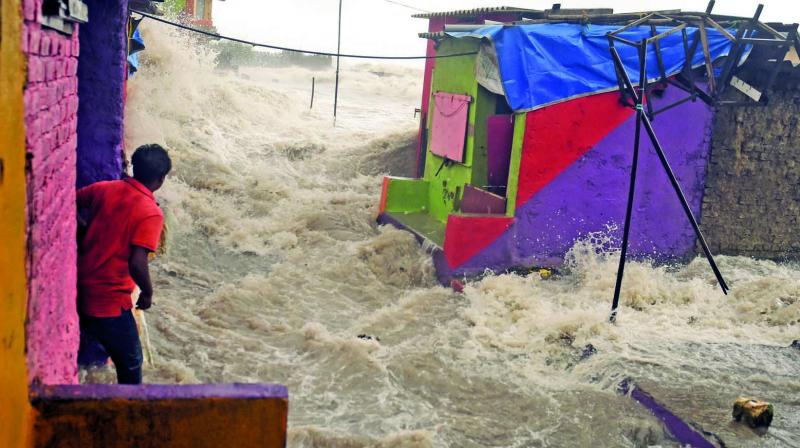 A man watches as the high tide enters shanties near the shore at Bandra. (Photo: PTI)

Mumbai: Mumbai will have to prepare itself for another spate of heavy showers on Sunday. The Indian Meteorological Department’s (IMD) prediction of heavy rains coupled with extreme high tides could result in water-logging too.

The IMD has stated that “heavy rainfall is expected in Mumbai.” On Saturday, the city received light to moderate rains in few parts. Since 8.30 am on Friday, the Santacruz and Colaba observatories recorded 16mm and 7mm of rainfall respectively.

According to Skymet Weather, an offshore trough extending from Karnataka to Kerala is likely to gain strength and move towards the north.

“Intensity of the monsoon rainfall is expected to increase along the coastal regions of Maharashtra. Rains in Mumbai will also intensify and moderate to heavy rains are expected” read the report by Skymet Weather.

Moreover, the high tides expected on Sunday is the highest this season with 4.97m at 1.49pm. On Saturday too, the city witnessed high tide of 4.96m at 1.02pm.

As per the IMD, southwest monsoon has been active over North Konkan, South Madhya Maharashtra and Gujarat state. The offshore trough at mean sea level off Karnataka-Kerala coasts now runs from north Maharashtra coast to Kerala coast.