Uncertainty over status of ancient idols in DRI custody

The sources claimed that if the idols are proved to be antiques, each of them would cost around Rs 2 crore. 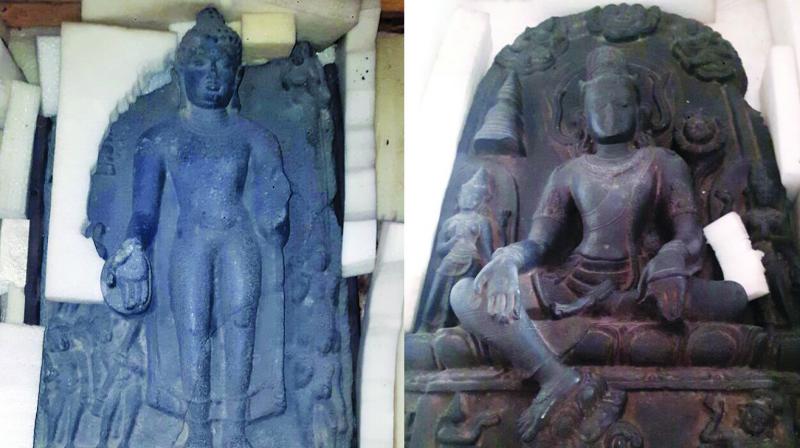 Indian-origin US man was arrested for smuggling antiques.

Mumbai: Whether the ancient idols lying in the Directorate of Revenue of Intelligence (DRI) office are antiques or not is yet to be confirmed. The DRI, which arrested a Mumbai-based businessman in February this year for running the smuggling syndicate of antiques, is yet to find out whether the idols are antiques. According to the sources, the Archaeological Survey of India (ASI) team that conducted a survey of the idols hasn’t given the nod to DRI to get the certification. After getting the nod, it may plan to approach the Director General (DG) of ASI, the apex body.

Not clarifying the status of the antiques, Dr V.S. Badiger, Superintending Archaeologist explained, “DRI had approached us to conduct an inspection of the idols in their custody. We conducted the inspection and have informed them the ancient idols may be antiques. However, if the organisation is not satisfied with the inspection committee’s observation, it is free to approach higher committee, and after that, the DG of ASI is final authority on the matter.”

However, denying that the ASI had raised doubts on the ancient idols smuggled out by Vijay Nanda, the official said, “There is a field test that is done in such cases. This test has been conducted and is now undergoing the various procedure as per law.” Further, when asked about the about under uncertainty over the status of idols, the officer said, “As far as we are concerned, they had replied to us positively.”

The sources claimed that if the idols are proved to be antiques, each of them would cost around `2 crore. The sources also claimed that the DRI may seek the second opinion and approach higher officials for the same.  The Mumbai DRI had arrested Vijay Nanda on February 7, an Indian-American businessman for allegedly trying to smuggle “antiques and artefacts” without legal documentation or registration of the ASI. He was, however, granted bail on April 10 as the DRI failed to file charge sheet within sixty days of his arrest.

What’s antique
According to law, an idol or any item is considered to be an antique when it is identified to be as old as 100 years or more. According to the ASI officials, an expert committee studies various aspects such as manuscripts, artistic behaviour portrayed through the structure and the age of the structure to determine whether the idols are antique.