Thousands of train commuters use the structure every day to enter Chhatrapati Shivaji Maharaj Terminus. 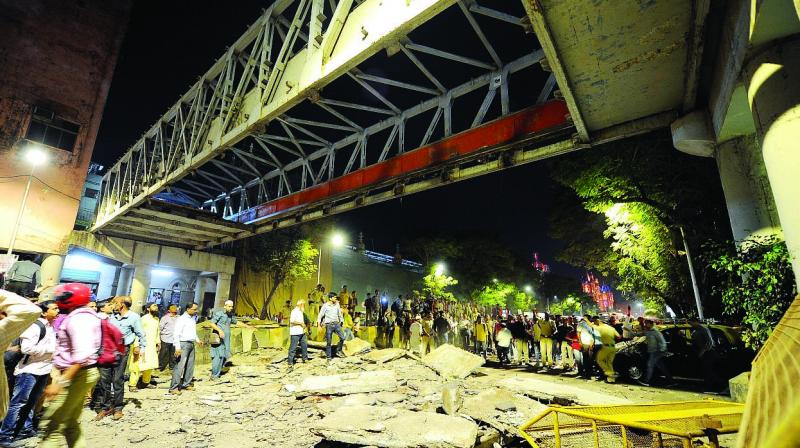 Passers-by look at a pedestrian bridge after a part of it collapsed on Thursday. (Photo: Shripad Naik)

Mumbai: Six people were killed and at least 35 others were injured after a overbridge (FOB) collapsed outside Chhatrapati Shivaji Maharaj Terminus (CSMT). The bridge was widely used by the public to cross the road outside the station.

The bridge was commonly known as ‘Kasab bridge’ as the 26/11 Mumbai attack terrorist passed through it during the terror strike. Thousands of Central and Harbour line commuters use the bridge daily to enter CSMT.

Eyewitnesses reported a loud sound around 7.30 pm after which several people were seen trapped under debris. Some 25 fire engines with around 250 firemen, a National Disaster Response Force (NDRF) team and around 150 Mumbai policemen were immediately pressed into service.

DN Road outside CSMT was shut to vehicular traffic and pedestrians and the injured were rushed to the state-run GT Hospital and St George Hospital.

Laxman Bhatia, an eyewitness, said, “I was travelling by bus towards Colaba when the bridge collapsed. We were lucky as the bus was just a few metres away from the structure and the driver suddenly applied the brakes. We all rushed to help the people trapped under the debris.”

A red signal at a traffic junction near the FOB proved lucky for a large number of motorists who were waiting for it to turn green. Without the red signal, the motorists would have passed under the illfated bridge, witnesses said.

Prime Minister Narendra Modi expressed deep anguish over the loss of lives in the incident.

“Deeply anguished by the loss of lives due to the foot overbridge accident in Mumbai. My thoughts are with the bereaved families. Wishing that the injured recover at the earliest,” the  Prime Minister tweeted.

After the rescue operation was completed by 9 pm, the fire department cleared the debris and the NDRF demolished the dangerous part of the bridge before the road was opened for vehicular traffic.