The Sena and BJP leaders are likely to start discussion on alliance from Sunday. 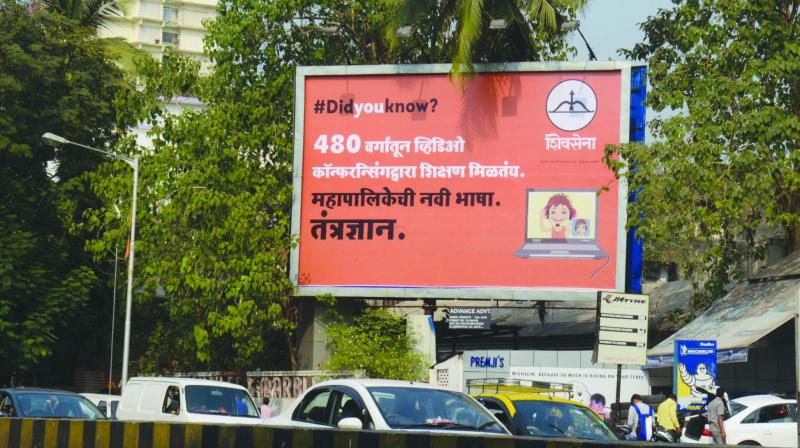 The Sena, which has always remained keen on using Marathi language, has used the English tagline ‘Did You Know?’ on every hoarding.

Mumbai: While the talks between Shiv Sena and BJP for the BMC polls are yet to begin, the Sena has started its campaign by putting hoardings throughout the city. The hoardings highlight its achievements in the BMC and also assurances about making the city even better. Sena, which has always remained keen on using Marathi language, has used the English tagline ‘Did You Know?’ on every hoarding.

One of the hoardings put at Dadar, Tilak bridge, promised coastal road from Nariman Point to Dahisar reducing travelling distance to 20 minutes only. In an another hoarding at Ghatkopar, the party has emphasised on its achievement in building Balasaheb Thackeray Madhya Vaitarana Dam, terming it as the 9th fastest built dam in the world. At Mahim, the hoarding boasts that 480 classrooms from the BMC schools have become digital.

Reacting on the hoardings, Sena MP Anil Desai said that the citizens would see more hoardings soon. “These are achievements by the Sena in the BMC. The hoardings have been put up at 15 locations and soon more will come. The party will even campaign on social media soon,” Desai added.

In the first phase of campaigning, the Sena has ignored BJP completely in the hoardings despite the fact that both parties are in alliance. The sources in the Sena said that this is the party’s exclusive campaign that will focus only on the Sena’s role in the BMC.

The Sena and BJP leaders are likely to start discussion on alliance from Sunday. The BJP has demanded over 100 seats from the Sene but the latter hasn’t agreed to the same. The sources said that the overall mood in both the parties is to go solo for the polls and strengthen the party base. Both the parties have also instructed their workers to remain prepared to go alone for the polls if the alliance talks fail completely.