Dr Amul Jhore from the hospital said the children would be discharged by late Wednesday evening or Thursday morning as nobody was serious. 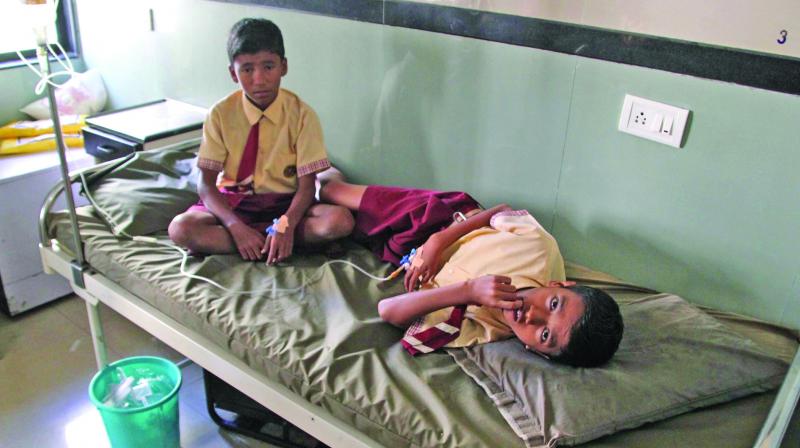 Mumbai: More than 30 students belonging to Jogeswari’s Balvikas Vidya Mandir school were hospitalised for suspected food poisoning on Wednesday after consuming the mid-day meal of dal-khichdi. The students, who belong to classes five to eight, complained of symptoms like stomach ache, vomiting and uneasiness when the authorities rushed them to the privately-run Konkan Hospital. The police are conducting a preliminary investigation and will wait for the forensic test results on the food samples before registering a FIR.

Dr Amul Jhore from the hospital said the children would be discharged by late Wednesday evening or Thursday morning as nobody was serious.

Deputy Commissioner (zone X), Navinchandra Reddy told this paper “The matter is under investigation and we have taken food samples and sent it to the Kalina laboratory for further investigation.” When asked if any FIR has been registered, he said, “We have recorded the statements of the parents as well as school management and will be investigating the matter thoroughly. After finishing our preliminary investigation, we will book the guilty.”

The school authorities served dal-khichdi to all the children between 12 pm to 1:30 pm. But after consuming the food, the students started feeling sick and vomiting one by one. “They were immediately taken to Konkan Hospital as all of them started vomiting,” said a school official.

According to sources, a Bhandup-based Safai Mahila Sanstha, which is appointed by the government, provides the mid day meal to the school. On being questioned, the a senior official from Brihanmumbai Munincipal Corporation’s education department said, “We did not get any information about this .”