Banks, ATMs in Mumbai run out of cash

Long to moderate queues were seen outside the banks and ATMs, as banks failed to disburse full permissible limit of cash to customers. 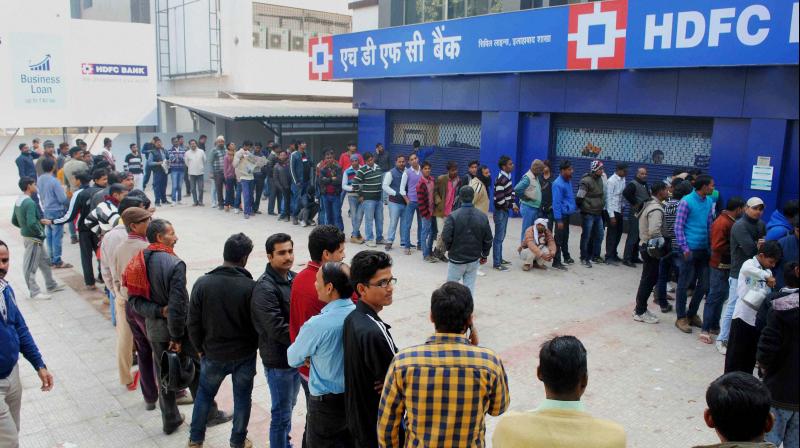 Banks, and ATMs in Mumbai ran out of cash on Wednesday. (Photo: PTI/Representational)

Mumbai: Demonetisation and it's cascading effects continued to aggravate the hardships of common man on the 35th day on Wednesday as banks and ATMs in Mumbai continued to run out of cash.

Long to moderate queues were seen outside the banks and ATMs, as banks failed to disburse full permissible limit of cash to customers and most of the ATMs not operational due to paucity of currency.

In few places, such as Sewree, Wadala, Ghatkopar, Thane and Dahisar, people queued up much before the opening time of banks.

Expressing his displeasure, Ashish Bansode, a senior executive working with an MNC in suburban Kanjurmarg, said, "I never thought of feeling so helpless at this stage of life.

Every day I have to be either in ATM queue or in bank queue.

This is hampering the productivity of working class and it will have a collateral impact on our economy."

He said, "Postal department is one of the best place to bank with. Officials have done all possible arrangements especially for the senior citizens here."

The recent cases of online fraud, being reported in certain sections of the media and social media, have put people in tizzy to go digital.

Sonu Shukla, partner in an event management firm based in suburban Andheri, said, "Now incidents of online frauds have started taking shape as was expected. Cards swiped at PoS and ATMs are being cloned. This is high time Government does something immediately to stop this to instill confidence among the people, otherwise this is going to be deterrent for government's move to go cashless."

However, some people are dubbing demonetisation as "today's pain for tomorrow's gain". Kanjurmarg based real estate agent, who successfully withdrew Rs 10,000 said, " As of now, everyone is still inconvenienced, but the crowds outside ATMs are thinning out and life is gradually normalising. We all will realise the greater good this move will accomplish in cleaning out black money from the economy."

He added that only those who continue to hold large amounts of unaccounted cash are the ones who are affected.