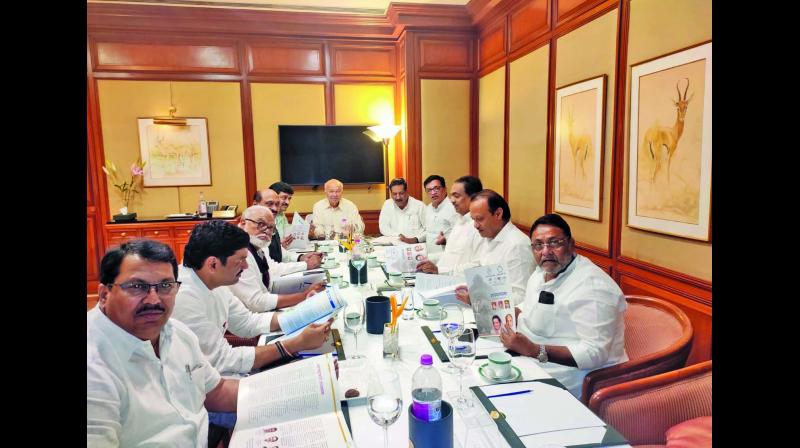 NCP leaders in a meeting on Wednesday.

Mumbai: The Congress and Nationalist Congress Party (NCP) on Wednesday reiterated that they will not take a decision on giving support to Shiv Sena to form the government before the two parties decide their priorities. The Congress and NCP named five members for a joint committee. The panel will decide upon a ‘common minimum programme’ (CMP), which will become the basis of agreement with the Shiv Sena.

The Shiv Sena has still not announced its exit from the NDA, which was Congress and NCP’s pre-condition for considering their proposal. However, NCP leader Jayant Patil said that though Mr Thackeray has not made an announcement, it is clear that they are no more part of the National Democratic Alliance (NDA).

Mr Malik said that farmers, labourers, poverty alleviation, minority, tribal, health and education would be the centre of the CMP.

State NCP president Jayant Patil told reporters that power-sharing formula was not being discussed as yet. Mr Patil said, “We have not set any conditions before the Shiv Sena. Right now, we are working on agenda for governance. Arvind Sawant has quit the Narendra Modi government and we believe through this step, the Sena has been officially pulled out of the BJP-led NDA.”

“We will give a stable government,” he added. Meanwhile, senior Congr-ess leader and former chief minister Prithviraj Chavan said the talks of government formation would start only after top leaders of the three parties approve the CMP.

Leaders of NCP and Congress had held a meeting over CMP at an unidentified location in Mumbai.