With Jay gone, Maharashtra to set up tiger protection force 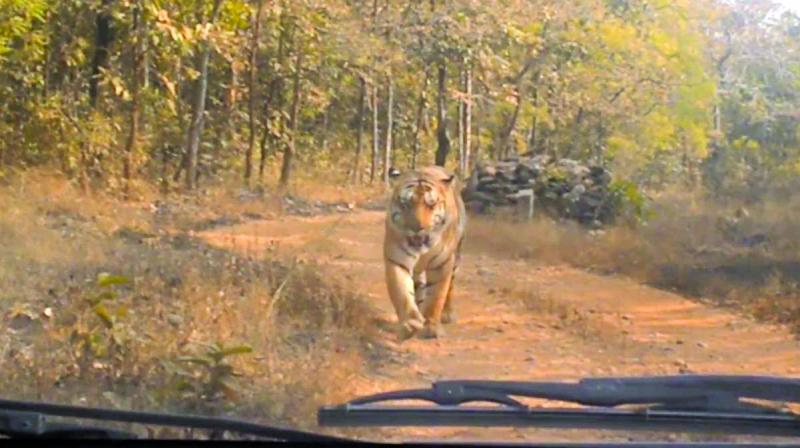 Jay had arrived in Umred Karhandla Sanctuary in 2013.

Mumbai: After ‘Jay,’ the biggest tiger from Umred Reserve Forest in Nagpur district went missing, the forest department now plans to set up a Special Tiger Protection Force in the six tiger reserves in the state. Making a presentation for Vision-2030 and outlining his plan for the next 15 years, forest minister Sudhir Mungantiwar also focused on preparing a plan to improve facilities in sanctuaries and tiger reserves to international standards and increase the forest cover in the state by planting 50 crore saplings in the next three years.

Chief minister Devendra Fadnavis has instructed all ministers to make presentations on plans for the next 15 years and termed it as Vision-2030. A senior forest department official highlighted the issues Mr Mungantiwar focused on, during his presentation in front of the CM. “Jay’s missing was a major setback for our department as it was the biggest tiger in Asia and we were proud to have him at Umred Reserve Forest. That’s why protection of tigers is the first priority of the department,” he said.

Seven-year-old Jay had arrived in Umred Karhandla Wildlife Sanctuary in 2013, and is nowhere to be found after it went missing in April. Forest officers and wildlife experts have come to the conclusion that the tiger is no more.

Learning from this incident, the state has decided to establish a Special Tiger Protection Force. “This will be a dedicated force that will work in tiger reserves and will be different from existing forest officers or forest guard,” said Mr Mungantiwar.

The minister added that the government is yet to decide on the number of personnel on the force. “One thing is clear, the force will be well-trained, we will provide them night vision cameras and sufficient vehicles. We will also use GPS and e-eye surveillance system for identifying the movement of wild animals 24x7,” said Mr Mungantiwar.

The department also plans to increase forest cover in the state on a large scale by planting 50 crore saplings over the next three years. It also aims to increased the forest area in Marathwada.