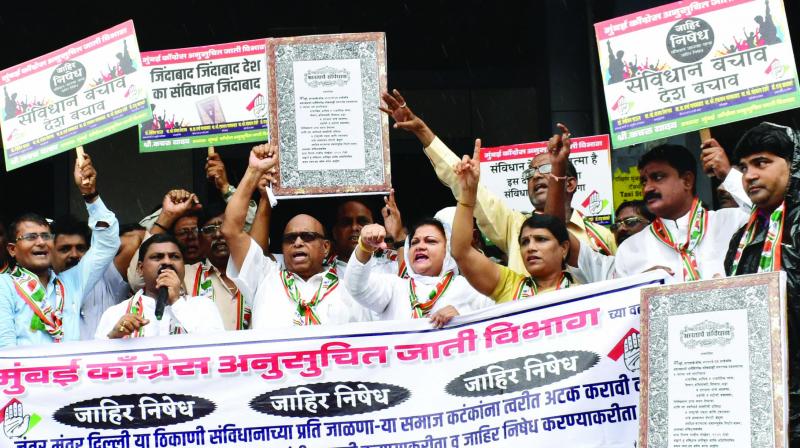 Congress workers protesting against the burning of Constitution at Dadar East on Monday. (Photo: Debasish Dey)

Mumbai: Opposition parties and youth from various organisations on Monday staged a protest in Mumbai and Pune against certain people who allegedly burned a copy of the Constitution at Jantar Mantar in New Delhi last week.

Mumbai Congress leaders staged a protest led by former MP Eknath Gaikwad at Dadar (east) on Monday morning. “Those who have burned the Constitution are infamous due to their political affinity. They are RSS supporters and close to the current ruling party. It is well known that they want to enact the Manusmruti in the country, but we will fight against this fascist conspiracy,” he said.

Meanwhile, Nationalist Congress Party (NCP) leader Nawab Malik led the protest in Chembur. “This government has been anti-democracy and anti-Constitution from day one. Its real face is getting exposed day by day. Citizens of this country need to unite against these forces to defeat them and save democracy,” said Mr Malik. Similar protests were held in Pune as well on  Monday. Almost 150 youth gathered at Good Luck Chowk, Pune to register their outrage.

Two youth and their colleagues had burned copies of Constitution of India at Jantar Mantar, in Delhi on August 11. One of the accused, Deepak Gaur, is a leader of Azad Sena while the other, Abhishek Shukla, is founder of the Aarakshan Virodhi Party.