Dhangar youth kills himself in protest over reservations

The Dhangar community has been demanding reservation under the 'scheduled tribes' category for almost a decade now. 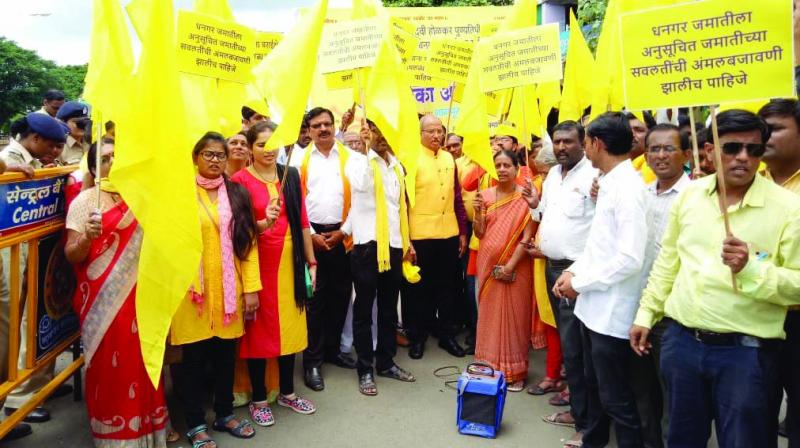 Members of the Dhangar community, who want reservation as an ST community, held protests across Maharashtra on Monday.

Mumbai: The Dhangar community held protests in various cities across Maharashtra on Monday to press for their demand for reservation under the Scheduled Tribes (ST) category. The community is currently listed under the section pertaining to Nomadic Tribes, section C category. Monday's protests were peaceful but there are reports of an alleged suicide by a youth from the community on Sunday in Parbhani, in protest against the state government's inaction.

Yogesh Radhakishan Karke, (21) committed suicide on Sunday by hanging himself in Gomewakadi village, Selu tehsil in Parbhani district of Marathwada. Community leader and Bharatiya Janata Party's Rajya Sabha MP Dr Vikas Mahatme has already given a call for agitation. The Monday agitation was held all over Maharashtra. The Dhangar community came out on the streets in Pune, Sangola, Solapur, Osmanabad and some other parts of Vidarbha.  "We do not want assurances. Now we want results. We were given many assurances for the last few years. But it is our rightful demand, and we want this government to make it happen," said Dr Mahatme.

The Dhangar community has been demanding reservation under the 'scheduled tribes' category for almost a decade now. The demand has intensified and political consolidation of the community taken place in the five years. The BJP had assured the community leaders, in its pre-election promise, that an immediate decision would be taken once it came to power. The assurance was also given that the party would take a decision during the first cabinet meeting of its government.