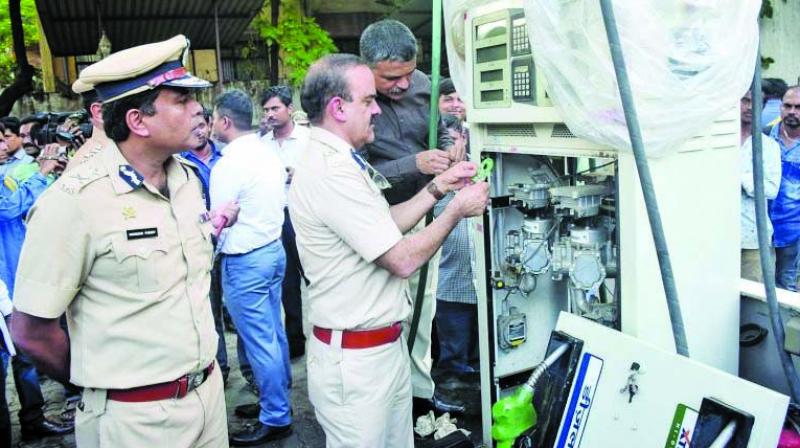 The Thane police has sealed 190 fuel stations and arrested around 30 persons.

Mumbai: Police teams from across the country have been visiting the Thane police, which has sealed 190 fuel stations across the state and arrested around 30 accused as part of its crackdown on the usage of remote-controlled and pre-programmed ‘cheat’ chips to rig petrol pumps.

Recently, teams from the Uttar Pradesh, Tamil Nadu and Karnataka Police interacted with the Thane police to discuss its probe findings, with the latter sharing insights on the tricks employed by the accused.

An official said that it has been revealed in the interrogation of the main accused that he sold cheat chips all over the world.

One of the officers from the investigating team said, “We have sealed around 190 petrol pumps so far. There are two types of cheat chips that were installed in the petrol-dispensing machines. One used to work on remote and other on code. The accused used to key in the code on the petrol-dispensing machine, and that code made the chip that was already in place in the machine, to work. In Maharashtra we have found that 90 per cent of the pumps (that were investigated) used code chips than remote control chips.”

An official said, “We have thoroughly worked on it for a month and then started raiding the petrol pumps. Recently UP Police, Karnataka and Tamil Nadu Police approached us to get more details about the chips and how to identify chips that the accused were using with codes. It has been revealed in the interrogation of the main accused that he sold chips all over the world.”

The Thane police, which in July arrested the alleged mastermind of the petrol pump scam, Prashant Nulkar, has found out during investigation that he charged a whopping `50 to `80 lakh per chip from customers abroad. Additionally, Nulkar used to get monthly payments from all petrol pumps to which he sold cheat chips. It has also come to light that Nulkar has undertaken 45 international trips to European countries, USA and other countries, owns five luxury cars and four bungalows, and owned a petrol pump that was sealed after his arrest.

Nulkar has told the police that he was employed as an engineer with Midco, a Kalina-based company manufacturing fuel-dispensing systems and other ancillary service station equipment, till little over a year ago.

He told the police that he used his work experience with the company to come up with the cheat chips and joined hands with other accused, who are also software engineers, to sell it to petrol pumps.