Before the ban, these young kids were the ones who stood at the top of the pyramids to break the ‘handi’ or pot due to their light weight. 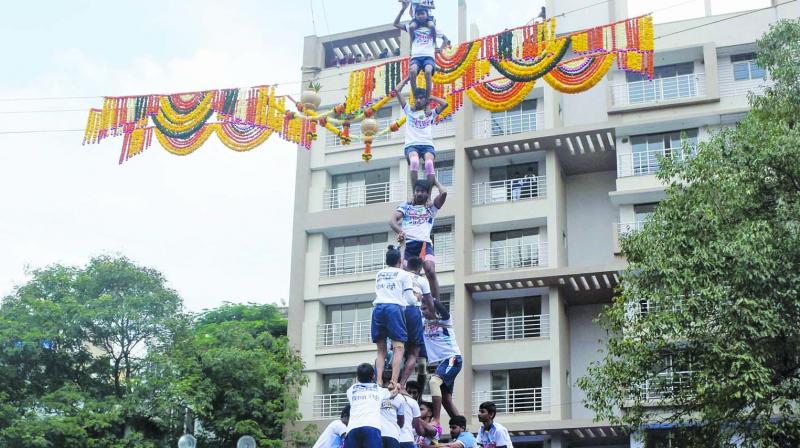 File image of a human pyramid of nine tiers, during Dahi Handi.

Mumbai: Buoyed by Bombay high court’s recent order allowing the building of human pyramids over 20 feet in height for Dahi Handi celebrations, which had been banned since 2014, several city-based organisers and participants are set to raise 32-42 feet high pyramids consisting of six to seven levels.

Due to the ban, the numbers of levels had been capped at four. However, they lamented the fact that under-14 kids have been banned from participating in the pyramids.

Before the ban, these young kids were the ones who stood at the top of the pyramids to break the ‘handi’ or pot due to their light weight.

“After receiving the HC nod, we are preparing to set up the dahi handi more than 20 feet high. So far 25 mandals are ready to construct 8 level pyramids. We will follow all the safety measures which the government has made compulsory,” said MLA Prakash Surve, who organises the festival at Magathane in Borivali east.

“Every year, we used to set up seven level dahi handi, but since 2014 we reduced the levels. However, our boys are excited this year because of the HC nod. We generally follow all the safety measures, like kneepads and helmets. Since 2014, an 18-year-old boy has been breaking the handi from our Mandal, and this year also we will be giving an 18-year old a chance,” said Ankur Gurav, coach of Chhatrapati Shivaji Maharaj Vyayam Mandal, Curry road.

Nitin Kale, one of the participants of the Khotwadi Pathak, Santa Cruz told The Asian Age, “We have been practicing for the last two months, but due to earlier restrictions, we have practiced for only six levels, but we will now try to go up to eight levels. Till 2014, small children used to break the handi from our side, but this year, a 14-year-old boy will break the handi.”