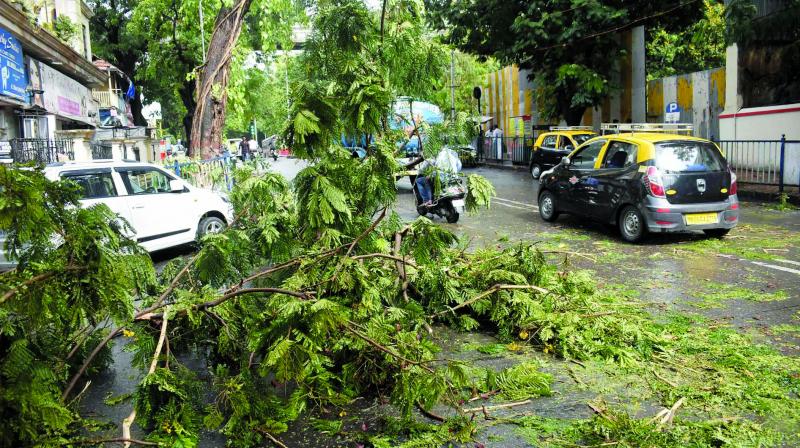 A giant tree collapsed near a bus depot at Dadar East on Thursday. Nobody was injured in the incident. (Photo: Debasish dey)

Mumbai: A woman and her seven-year-old child were injured after a tree fell on them around 2.30 pm in Jose Compound, Tank Pakhadi in Andheri (east).

Sulochana Ballappa (45) received head and shoulder injuries while her daughter Saiman Ballapa suffered a right hand fracture. They were taken to Cooper Hospital. In another incident, at Pali Hill, a huge Gulmohar tree collapsed on an autorickshaw, crushing it on Thursday morning.   With the city recording 207 tree fall incidents on Thursday — 98 in the western suburbs, 45 in the eastern suburbs and 64 in the city area, the Brihanmumbai Municipal Corporation (BMC) has put up boards instructing citizens to avoid standing below or near trees during heavy rainfall at 20,000 trees across the city. Around 75 tree collapse cases were seen on Wednesday.

Meanwhile, on Thursday, Mitunkumar Kariya (29) drowned in the sea near Bandra Bandstand around 2.50 pm due to high tide. He was taken to Bhabha Hospital but was declared brought dead.

“The warning boards will help avoid injuries and loss to property. Every ward has 700 to 800 boards,” said a senior officer from the BMC’s garden department.

The BMC began putting such boards last year after frequent reports of tree collapses. Since the past few years, the BMC has been facing flak from citizens and activists as such incidents continued to kill pedestrians. The BMC has also been blamed for the unscientific trimming of trees, which weakens them. Cement is put around the roots of trees while road work weaken the roots, activists pointed out.

In last couple of years, tree collapses have increased, causing more injures and even deaths. To avoid the blame, the BMC has put a clause stating that contractors appointed for trees trimming will be held responsible if a tree collapses and causes any loss to property or injuries.