In an incident that occured on October 24 2012, a one-day-old baby boy was kidnapped from city’s Wadia hospital. 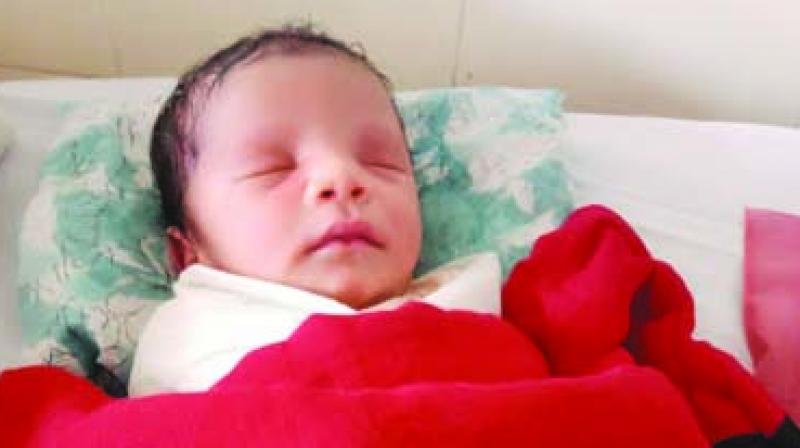 The 5-day-old-boy who was kidnapped on Thursday.

Mumbai: A five-day-old baby boy born to a Dahisar-based couple was kidnapped from ward number seven of the civic-run BYL Nair Hospital on Thursday evening, a source said.

“The mother and the infant had fallen asleep around 5.30 pm and suddenly an unknown lady came and picked up the infant in her arms and fled away. The whole incident has been captured on a closed-circuit television on the premises,” the source said.

Talking to The Asian Age, police inspector Vijay Bandal said, “After the baby was not to be seen in the cradle, the mother raised an alarm and informed the hospital’s security. We were approached after all search attempts of the family failed.”

The Agripada police has registered a case of kidnapping under sections 361 and 363 of the Indian Penal Code against an unknown woman who seemed to be about 45-years-old in the footage captured. The police is now investigating in the case.

A relative of the infant said, “It saddens us to have lost the baby. Initially none were cooperative when the mother began searching. The staff came to her aid later.”

Meanwhile, Dr Ramesh Bharmal, dean of Nair Hospital, said, “The incident of  kidnapping happened during visiting hours. We have a tight security in neonatal care ward. The police are inquiring about it.

In an incident that occured on October 24 2012, a one-day-old baby boy was kidnapped from  city’s Wadia hospital.

Jasmine Naik (28), a resident of Gorai, gave birth to the baby by C-section on October 23. No leads have emerged with regards to the case yet.