Will be done on trial basis; Goyal shares video on Twitter. 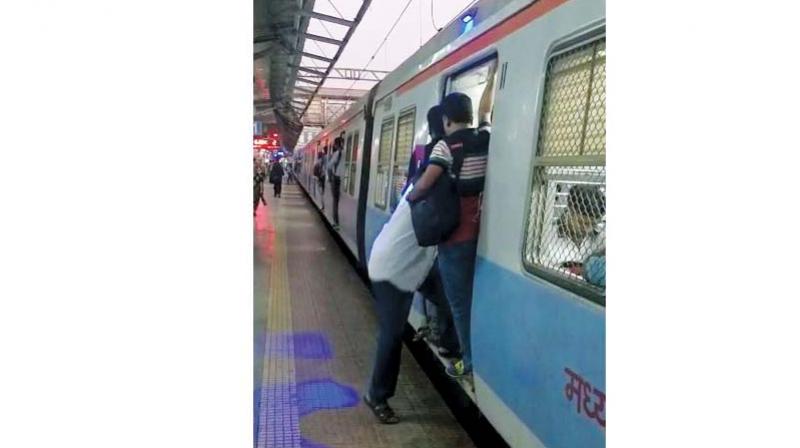 Blue light indicator on the door of a local train.

Mumbai: In order to prevent mishaps, the railways has decided to install, on a trial basis, visual indicators that will flash a blue light on the doors of some trains to alert passengers when the boggie starts moving. If the initiative is successful, it will install these lights on all local trains to indicate when they are departing so that people can avoid attempting to board or alight running trains.

Union railway minister Piyush Goyal has shared a video in this regard on Twitter. In the video, a blue bulb is seen blinking thrice as soon as the train starts. Mr Goyal, while posting this video, wrote, “Safety first”.

The installation work of these indicators is being carried out in the Central Railway’s (CR) Kurla car shed under the guidance of D.K. Sharma, general manager, CR.

CR will also monitor the performance of the new blue light visual indicators and, based on the outcome and commuter feedback, a decision will be taken on installing them on more coaches and rakes of Mumbai suburban locals.

Highlighting the dangers commuters face, Minal Sharma, a call centre employee, told The Asian Age, “During peak hours people rush to catch trains. No matter the rush, everyone wants to reach office on the time and many people fail to enter the wagon when the train starts. Sometimes, people are seen falling down from trains. If such a light is installed on the doors, it would be to the commuters’ advantage”.

Stating that Railways always overlooks commuter safety despite the myriad issues faced by the differently abled, senior citizens and women during train journeys, banker Sumeet Kamble said, “Due to the high court’s intervention, Railways has started taking steps for the safety and security of passengers. If Railways itself decided to install indicators, then, I, as a commuter, would welcome this decision.”

CR had made a short film starring Bollywood legend Amitabh Bachchan last year in a bid to teach commuter safety rules. The actor shot for the public awareness campaign ‘Ek Safar Railway Ke Sath’ at Chhatrapati Shivaji Maharaj Terminus (CSMT). In the film,  the actor appeals to passengers to follow the safety rules and not to cross rail tracks and always use the foot overbridge.