Big cat strayed into society in search of prey, trapped and sent to SGNP. 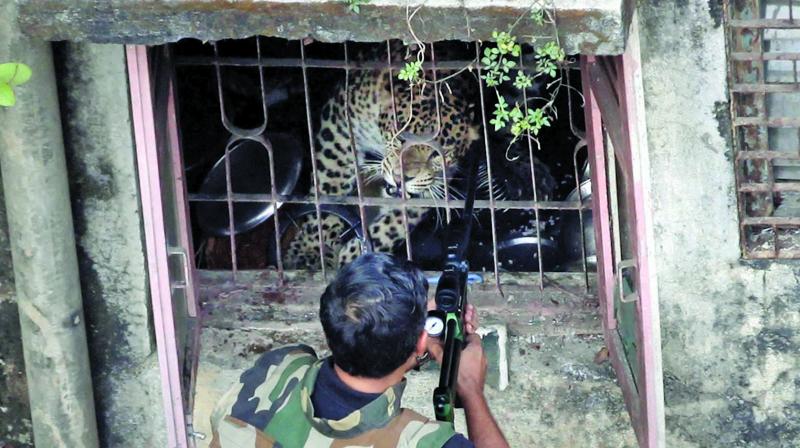 The animal was tranquillised by the forest officials. (Photo :PTI)

Mumbai: A male leopard that strayed into a residential complex at Mulund (east) on Saturday was rescued by forest department officials and moved to Sanjay Gandhi National Park (SGNP). The big cat — whose age is estimated to be between four and five years — injured five persons, who had to be treated at Sion Hospital but were discharged in the evening.

According to officials, the leopard was probably in search of easy prey such as dogs and pigs.

Forest department officials said they got news of a leopard straying into the area, which is nearly eight kilometres from SGNP and surrounded by hills and forests, around 7.30 am.

The complete rescue team from SGNP and the department were at the spot an hour later.

Amid the collective efforts by the department, SGNP employees and NGOs, officials have claimed that panic had set in among the residents, which scared the big cat and led it to attack people who came across it.

“The nocturnal animal, surrounded by people, ran into a room and confined itself there. While entering, it injured the person residing in the home who fled. It did not go for any kill. Leopards are misunderstood as killer animals,” said Shailesh Deore, range forest officer, SGNP.

It took around four hours for the rescue operation, but the task of cordoning off the buildings dragged it out.

“All the three buildings at the spot were evacuated, but a lot of time was spent in controlling the crowd. We later learned that the leopard was in the middle building; and on reaching there, it could be seen from the window,” said Mr Deore.

Later, the animal was tranquillised and sent to the SGNP.

Officials also said that homes popping up on forestland are the reason why wild animals stray into human habitats. “This is the second case of man-animal conflict since last month after Andheri (east) incident. It shows that residential buildings have entered forest areas,” said Jitendra Ramgaonkar, deputy conservator of forest, Thane.

Experts believe that such areas and should be kept garbage free to prevent leopards from entering. “Garbage attracts dogs and pigs, which are prey for leopards. Dustbins at the SGNP periphery should also be regularly cleaned,” said Sunish Subramanian, wildlife warden.