Fire breaks out at airport, none hurt

A massive fire at the city’s domestic airport, Terminal 1B, engulfed a 5,000 sq ft area on Saturday afternoon. 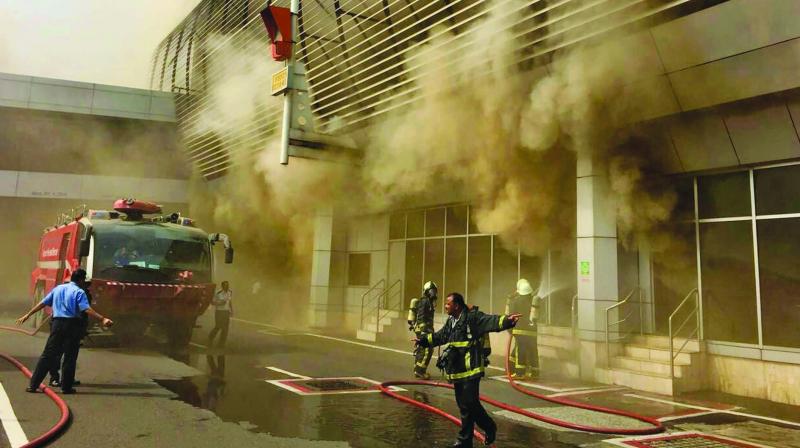 Firefighters dousing the flames at the airport. (Photo: PTI)

Mumbai: A massive fire at the city’s domestic airport, Terminal 1B, engulfed a 5,000 sq ft area on Saturday afternoon. No casualties were reported as there was no activity in the ground floor hall, when the blaze began. According to airport officials, eight fire engines rushed to the spot and managed to douse the flames by 3pm.

According to a Mumbai International Airport Limited (MIAL) spokesperson, flight operations were not affected due to the fire. “The fire broke out at the ceremonial lounge, which is away from terminal B so the operations were normal and did not affect the movement of passengers. No harm to human life has happened. Within no time the fire and smoke was brought under control,” said the MIAL spokesperson.

“The fire was brought under control at around 3 pm and it was confined to an electrical wiring, installation, wooden furniture, wooden partition, sofa, ceiling etc in an area about 5,000 sq ft,” said a fire official. The ceremonial lounge was completely gutted in the fire.  The fire brigade received the fire call at around 1:46 pm on Saturday. The fire escalated to level III at around 2:41 pm, revealed the fire brigade officials.