The operating medium and the nature of operations undertaken by submarines expose them to a high degree of inherent risk. 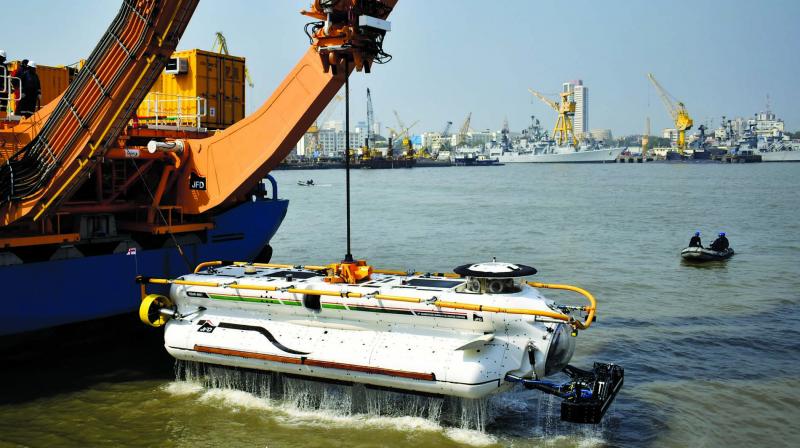 Indian Navy’s first fly-away Deep Sea Submarine Rescue System was formally inducted by Admiral Sunil Lanba, Chief of the Naval Staff, at the Naval Dockyard in Mumbai on Wednesday. Acquisition of this system is a significant and pioneering jump in the Indian Navy’s capability in deep submarine rescue. (Photo: Debasish Dey)

The operating medium and the nature of operations undertaken by submarines expose them to a high degree of inherent risk. In such an eventuality, traditional methods of search and rescue at sea are ineffective for a disabled submarine. To overcome this capability gap the Navy has acquired a third generation, advanc-ed submarine rescue system consisting of a non-tethered Deep Submergence Rescue Vehicle (DSRV), Navy officials stated.

The deep sea rescue system would have a global footprint and can be mobilised from the Naval base at Mumbai to the nearest mobilisation port by air/land or sea to provide rapid rescue to the submarines in distress. The newly-acquired capability would be operated and deployed by the crew of Indian Navy’s newly-formed Submarine Rescue Unit (West) from its base in Mumbai.

“Acquisition of this capability is a significant and pioneering jump in the Indian Navy’s capability in deep submarine rescue. The Indian Navy currently operates submarines of the Sindhughosh, Shishu-mar, Kalvari Classes as well as nuclear powered submarines and DSRV will prove to be very effective,” stated a release issued by the Navy.

The Indian Navy now joins a select league of nations worldwide with the sovereign capability, in fly-away configuration, to search, locate and rescue crew from a disabled submarine.

The Indian Navy’s deep sea submarine rescue system considered to be the most advanced system currently in operation globally is capable of undertaking rescue from a disabled submarine up to 650m depth.

The DSRV, which is operated by a crew of three, can rescue 14 personnel from a disabled submarine at one time and can operate in extreme sea conditions (up to Sea State 6).

More than 80 naval personnel have undergone training on DSRV operations and its exercises will continue in future as well, a Naval official said. The Navy has also given a
Rs 9,000 crore contract to the Hindustan Shipyard Limited for building two mother ships for DSRVs and deliver them by 2020, the official said.