The Dalai Lama will be seen visiting two other education institutions on Thursday and Friday during his three-day Mumbai tour. 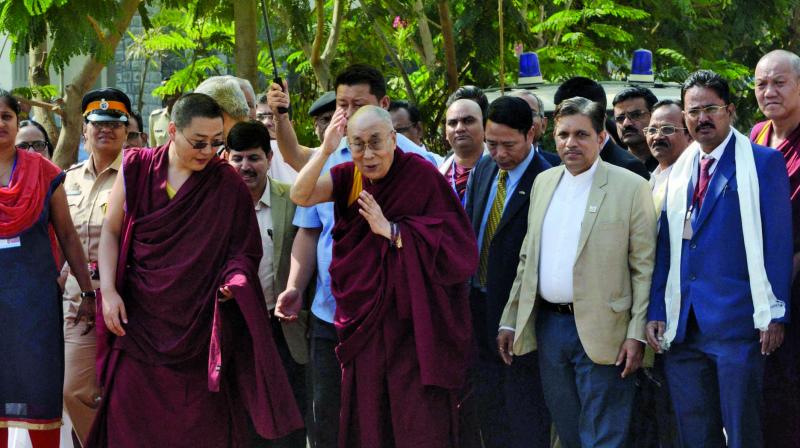 MUMBAI: The Dalai Lama addressed students at the University of Mumbai (MU) on Wednesday. The Tibetan spiritual leader spoke about the ‘Concept of Maitri (Metta) in Buddhism’ that was organised by the department of philosophy, the centre for Buddhist studies, Kalina campus.

Also present was MU vice-chancellor Suhas Pednekar and VC of central institute of higher Tibetan studies, Varanasi, Geshe Ngawang Samten. While interacting with the students, the 83-year-old leader imparted knowledge about integrating peace and wisdom in education while excluding materialistic behaviour off the human beings.

“Loving kindness, metta maitri have to come from education rather from a religion,” he stated. He further continued, “21st century should be a century of peace and dialogue. Everybody needs peace but everyone is tired of their own struggles. Hence, we should be helping and supporting each other through thick and thin.”

The Dalai Lama will be seen visiting two other education institutions on Thursday and Friday during his three-day Mumbai tour. In Guru Nanak College at Sion, he will be delivering lecture on ‘compassion and the need for universal responsibility’. The following day, in a lecture series, he will be featured in the 22nd edition of Tech fest, Indian Institute of Technology-Bombay (IIT-B).

In the lecture series at IIT-B, several other prominent personalities have been featured in the past like Dr Abdul Kalam, Dr John Forbes Nash Jr, Nobel Laureate in Economics, etc. The organiser of the Tech fest, a core team of 23 people chose him as one of the three speakers for this year’s lecture series. The other two are Dr John C. Mather, Nobel Prize winner in physics -2006 and professor Anima Anandkumar,  director of machine learning research at NVIDIA.