Mr Pawar said that a whopping Rs 70,000 crore was released for farmers by the UPA government when he was Union agriculture minister. 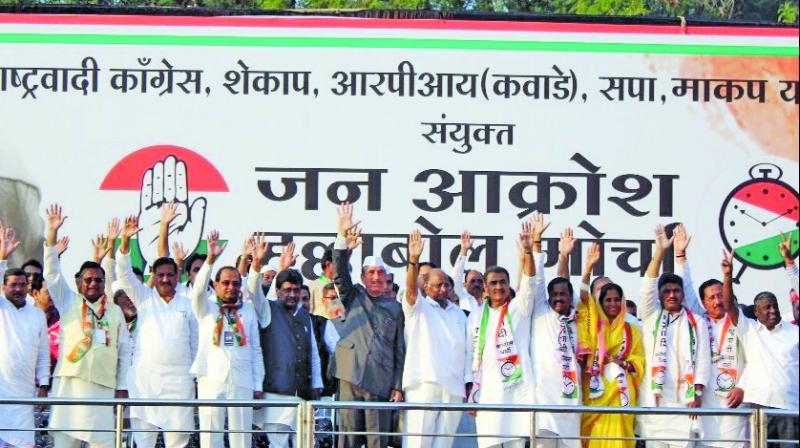 Congress and NCP leaders at the ‘Jan Akrosh Halla Bol’ rally in Nagpur on Tuesday.

Nagpur: Nationalist Congress Party (NCP) president Sharad Pawar on Tuesday hit back at Maharashtra chief minister Devendra Fadnavis for his “Halla Bol” remark against the Congress and NCP, saying that “neglected farming community can throw out your government”.

Mr Fadnavis had threatened to “expose the misdeeds” of Congress and NCP who had launched Halla Bol rally to highlight the “plight” of farmers.

The Opposition has repeatedly criticised the government over the issue of farm loan waiver and adequate prices to the agriculture produce.

Addressing a mammoth rally of opposition at T-point on busy Nagpur-Jabalpur road, Mr Pawar asked the farmers not to pay any bills to the respective authorities and defy the government. Mr Pawar slammed Mr Fadnavis, saying, “We will not cow down by the vindictive attitude of the state government”.

Mr Pawar said that a whopping Rs 70,000 crore was released for farmers by the UPA government when he was Union agriculture minister.

Mr Azad also criticised the Bharatiya Janata Party (BJP) government in the state saying he knows the pulses of people and their problem since he had twice represented people of Washim (Yavatmal) in Lok Sabha.