The couple had undertaken the joyride from the Juhu airstrip to Goregaon’s Film City and back to celebrate their sixth wedding anniversary. 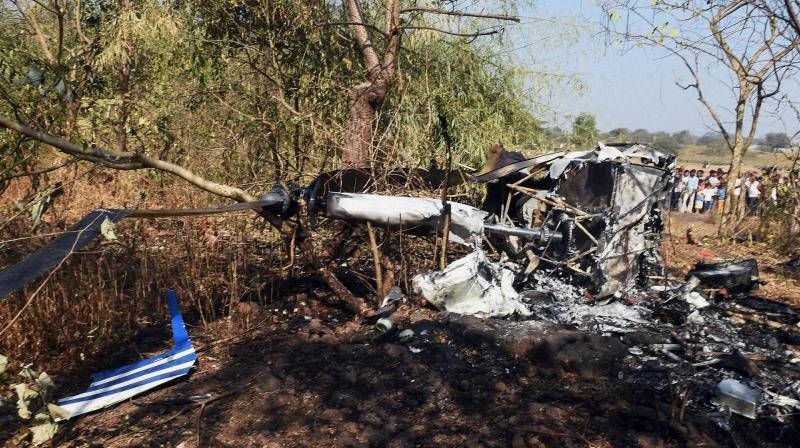 A view of a wreckage of a helicopter which crashed killing one and injuring three in Arey colony in Mumbai. (Photo: PTI)

Mumbai: Borivali’s Ritesh Modi (36) who, along with his wife Vrinda (34), had hired private operator Aman Aviation’s helicopter on Sunday morning for a joyride — but ended up with multiple injuries when it crashed due to an alleged clutch problem — is in a critical condition at Andheri’s private Seven Hills Hospital. He is comatose and has multiple head and chest injuries, while his wife Vrinda is sedated and her burn injuries are being treated.

The couple had undertaken the joyride from the Juhu airstrip to Goregaon’s Film City and back to celebrate their sixth wedding anniversary on Sunday. Ritesh is likely to take a call if he should undergo a surgery once the 48-hour observation period gets over, said hospital sources. Their four-year-old son is currently with his maternal grandparents. The helicopter’s pilot, P.K Mishra (53), was declared ‘brought dead’ as stated by the Seven Hills Hospital authorities.

The superintendent of the hospital, Dr Raj Karva, confirmed that Ritesh is in a critical condition. He has multiple head and chest injuries. Technician Sanjeev Shankar, who was also on board the aircraft, will have his ankle operated upon soon.

Dr Karwa told The Asian Age, “We may have to conduct a surgery on Ritesh. He is still unconscious.”

He added: “We are waiting for him to get stable, while Vrinda is under sedatives and sustained burn injuries on her head, neck and back. Shankar suffered fractures in his wrist and ankle.”

The doctor further said: “Shankar will have to go in for ankle surgery. He has given his statement to the police, and it may be that he is discharged after four to five days.”

He added: “Regarding Vrinda, she has given her statement, but her fingerprint or sign could not be taken since she has suffered burn injuries. Her case has been forwarded to a plastic surgeon, who will inspect her and take a call accordingly.”

A relative of the couple’s said: “We are hoping and praying for the best. It’s a shock for all of us.”

Despite several attempts made by The Asian Age to contact Mishra’s family, via text messages and calls,  it could not reach them for a comment.