Sources from Aman Aviation said that they are likely to collect the wreckage of the aircraft from the site on Tuesday morning. 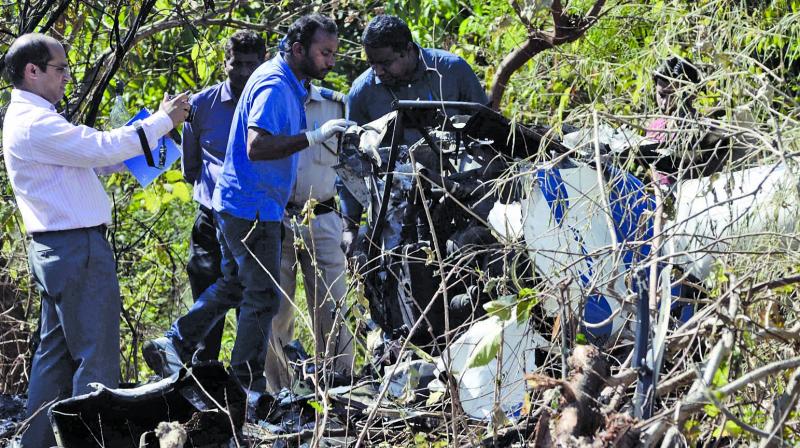 Directorate General of Civil Aviation officials collect evidence from the crash site during their investigation on Monday. (Photo: Shripad Naik)

Mumbai: After private operator Aman Aviation’s helicopter crashed in Goregaon on Sunday, aircraft accident investigation and civil aviation safety officials visited the spot on Monday. The teams gathered information on the mishap and are going to submit the same to civil aviation ministry, which will then form a committee. These teams, from Delhi, visited the Juhu aerodrome to recover the transcript of the pilot’s conversation with air traffic controllers.

A team of two officials, Jasbir Singh and Ramchandra, from Aircraft Accident Investigation Bureau (AAIB) visited the accident spot in the Filter Pada area of Aarey Colony in Goregaon (east) around 2 pm on Monday. These two officials collected evidence such as the helicopter’s components and photographs of the site. Earlier, after landing in Mumbai around 10.30 am, the duo visited Juhu aerodrome and met air traffic controller officers (ATCOs) to get the transcript of their conversation with captain P.K. Mishra, the pilot of the ill-fated aircraft.

Commenting on their visit, the AAIB officials told The Asian Age, “We will give the report to the civil aviation ministry, and they will then decide whether forming a separate investigation committee is needed or not.”

After these officials had left the crash site, their counterparts from the Bureau of Civil Aviation Security (BCAS), under the leadership of assistant director Ajay Kumar, visited the spot. An official from BCAS told The Asian Age that the team is looking into whether there were any security lapses or not, and are trying to find out if the chopper was tampered with. “Our investigation is at a very preliminary stage and, as of now, we are trying to find out if there was any sabotage,” said Mr Kumar. The official further said that the BCAS team would now visit Juhu aerodrome to check if the helicopter had been kept in the hangar under proper conditions.

In the meantime, sources from Aman Aviation said that they are likely to collect the wreckage of the aircraft from the site on Tuesday morning. Aman Aviation CEO Rajendra Johari said, “The Directorate General of Civil Aviation (DGCA) wants us to preserve the remaining parts of the copter until the investigation is completed.”