The driver of the car has been arrested and is unhurt. 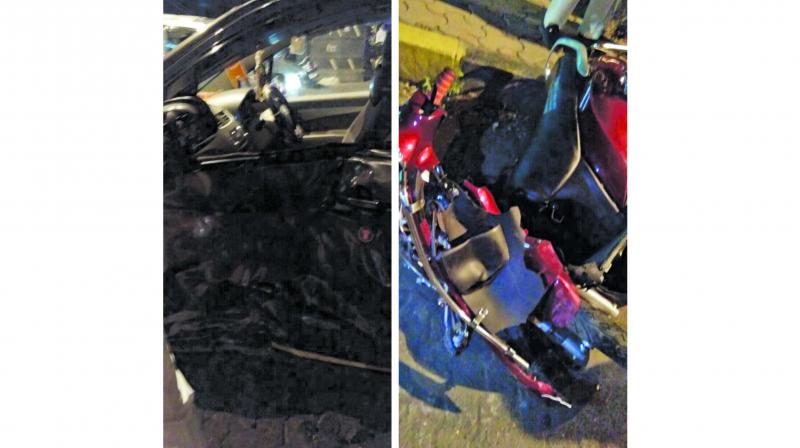 The bike and the car that collided into each other.

Mumbai: A biker and pillion rider died on the spot at Bandra Kurla Complex (BKC) after the motorcycle collided with a Ritz car late on Saturday night. The driver of the car has been arrested and is unhurt, while the biker duo was rushed to the civic-run Sion Hospital where they were declared dead on arrival. The BKC police has booked the accused for rash driving.

The police did not reveal the identities of the deceased as per the request of their families. The deceased men were in their mid-20s and were residents of Kalina in Santacruz east. They had come out for a night ride.

The accident took place near the Ferrari showroom at BKC, where the bike and the car, driving in the same lane collided after the Ritz car changed the lane without giving any indication. The collision was massive and the duo riding on the bike were flung from the bike and landed over 100 metres away

Kalpana Gadekar, senior police inspector of BKC police station, said, “We have arrested the accused for rash driving and booked him under section 279 and 304 of the Indian Penal Code that pertains to rash driving and culpable homicide not amounting to murder.”

The officer also added that the biker was wearing a helmet at the time of the accident, but died to the internal injuries sustained in the accident.