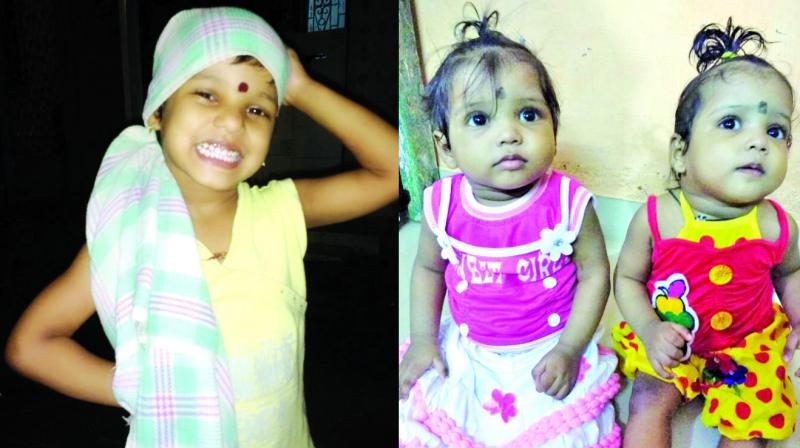 Harshita and the twins Ananya and Aarohi

Mumbai: A 40-year-old man committed suicide after allegedly poisoning his three daughters — a four-year-old girl and one-year-old twins. The man, a Saki Naka resident, left behind a note blaming his father, brother and sister-in-law, alleging that he took the step since they were harassing him to vacate the house he stayed in.

The deceased have been identified as Mangesh Anerao, Harshita and twins Ananya and Aarohi. The family of five including the survivors Madhura, Mangesh’s wife, and a son Amey (7) stayed in a one-storey house in Vitthal Chawl, near Mohali pipeline in Saki Naka.

According to the police, Mangesh who was unemployed had sent Madhura and Amey to collect money from a family friend in Virar Saturday morning.

The police suspects he murdered the girls and killed himself soon after. “At 6.30 am, he called his sister Usha, who works in Ghatkopar, to come to the house urgently. When she reached she found the door slightly ajar and all the deceased lying on the floor,” said senior police inspector, Saki Naka police station, Avinash Dharmadhikari.

“We think the time of the incident is between 7 am and 9 am,” said Mr Dharmadhikari.

The Saki Naka police revealed the suicide note made clear allegations against Mangesh’s family members. The suicide note stated, “I have spent a lot of money on my mother’s cancer treatment but my father Rajaram Anerao (75), brother Narendra Anerao and sister-in-law Sarika say that I haven’t. Now they are asking me to leave the house since it belongs to my father. Where will I go? They are responsible for my death.”

Prashant Jadhav, a close of friend of Mangesh said that a hearing held at the Women and Senior Citizen Redressal Cell of Saki Naka police station on Friday afternoon had upset his friend. “Mangesh was informed that he would have to vacate the house, since it was owned by his father, within a month. This upset him and also made him panic as he had no job and would soon have no house,” Jadhav said.

He added that he met his friend last at 10.30 pm on Friday and reassured him that they would find a way to get over the problem.

Neighbours while remembering the daughters as playful and mischievous, said Mangesh rarely spoke. “He was an alcoholic and would be found sitting and smoking outside the house,” said a neighbour.

The police, which has sent the bodies to Rajawadi Hospital for a post-mortem, has till now registered a case of accidental death.